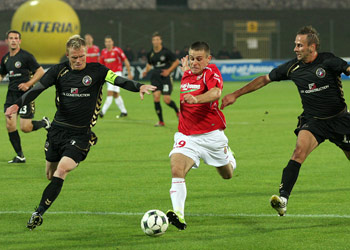 With the Polish national team teetering on the verge of failure in the qualifications for the 2010 World Cup in South Africa, coupled with the head coach being sent home, the Polish national team has to start over again. What’s more, with all Polish club teams out of the European tournaments in the preliminary stages, it is time for Polish football to learn from their mistakes and get back to the drawing board.

Stefan Majewski has temporarily replaced Leo Beenhakker as national head coach. The former coach of Widzew Łódź and Cracovia drastically changed the squad for the decisive games against the Czech Republic and Slovakia in October. No more the dodgy and controversially-behaved Artur Boruc (Celtic), or substitute goalies Łukasz Fabiański (Arsenal), or Tomasz Kuszczak (Manchester United). Instead, Majewski goes back to basics with Jerzy Dudek (Real Madrid) and Wojciech Kowalewski (Iraklis).

Jakub Rzeźniczak (Legia), Mariusz Pawelec (Śląsk), Sławomir Peszko (Lech) and Piotr Polczak (Cracovia) all joined the squad for the first time, sharing only eight international caps amongst them. The green players must compensate their lack of experience and perhaps quality with enthusiasm and fighting spirit, if they want to qualify for the elimination play-offs. Poland plays the Czech Republic on 10 October in Prague, then welcomes Slovakia in Chorzów on 14 October.

On club team level, Wisła Krakow, Lech Poznań and Legia Warszawa were expected to advance to at least the Europa League. Wisła Krakow really made a fool out of itself by losing against Levadia Tallinn, and although Lech and Legia did put up a good fight against FC Bruges and Brondby respectively, the two teams did not manage to advance to the group stages. Which is why a fresh start has to be made, beginning with a good performance in the national league. In Poland, the league winner qualifies for the UEFA Champions League second round elimination, while the runner-up, number three and the cup winner advance to the UEFA Europa League qualifying rounds.

A quarter of the way through the competition it is Wisła taking a comfortable lead. Their eighth match was won against Polonia Warsaw (2-1), with goals scored by Patryk Małecki and Paweł Brożek. The other two main rivals played each other. Legia was clearly the better side in Warsaw, beating Lech 2-0. Lech Poznań is now nine points down on Wisła and the team that last season took the cup home and performed remarkably well in Europe is now nothing but a shadow of last year’s team lead by Franciszek Smuda.

Not that Smuda himself is better off. His new side, Zagłębie Lubin, is still almost at the bottom, having lost their last game in and against Gdańsk, where the local Lechia kept the points home (1-0). Krakow’s other team, Cracovia, stabilised after a troubled start, taking six points out of their last five games, including a goalless draw against the penalized team of Jagiellonia Białystok. But overall, the general view is that while Wisła Krakow keeps marching on unbeaten, the other rivals keep spilling points. There are still seven matches to go before the winter break that will last until February 2010.