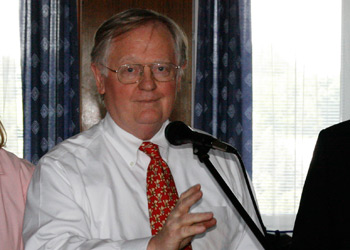 Victor Ashe spent five years as U.S. ambassador to Poland, and as he left this week to make way for his successor, Lee Feinstein, he had some warnings and critiques about the way American embassies have functioned since 2001.

Most notably, Ambassador Ashe criticised the “fortress-like” feel of the American embassies that have been built since 11 September 2001, whether in so-called “safe places” or hot-spots for violence such as Baghdad.

“The type of embassy you might build in Pakistan has a different set of security needs — which in that case would be substantial — than an embassy you might build in Reykjavik, Iceland, or in Warsaw, Poland,” Ashe stated in an interview with The Associated Press. Ashe fears that while security is important, fortress-like embassy buildings can easily send the wrong message to the host country’s citizens. That, and they’re excessively expensive, he said.

“The cost to the taxpayers if these standards are implemented worldwide will be huge,” Ashe wrote. “The design of many of these buildings quite often creates a fortress-like atmosphere and the impression given to host nations can be less than friendly; not the warm, welcoming impression we should offer as Americans,” Ashe wrote in a farewell e-mail.

He also highlighted the especially delicate case of the embassy in Warsaw, which he oversaw for five years: “In the early 1960s, the American government demolished a beautiful historic Residence here in Warsaw to build our current structure, which many regard as an eyesore. On either side of our current building stand the truly historic structures occupied by the Swiss Embassy to the south and the Bulgarian Embassy to the north. Our architecture has not set a good example in the historic neighbourhood where we are.”

New safety standards implemented since 2001 include a forced 30-metre setback from all sides. Ashe also commented that many embassies are not located in city centres, making reaching them difficult for ordinary citizens.

However, he stressed that the statements are “personal observations which reflect only my own views.”