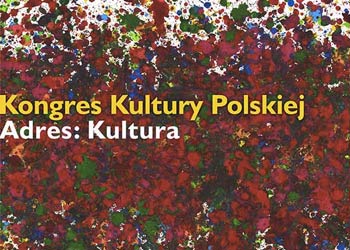 Today is a great day for culture-loving devotees residing in the cultural capital of Poland. The sixth Congress of Polish Culture, organised by the Ministry of Culture, begins today in Krakow and will continue through Friday.

The nation’s prominent writers, filmmakers, composers, architects and musicians, as well as museum heads, art curators and politicians will be in Krakow for the three days of the conference, discussing a wide range of topics involving all aspects of the nation’s cultural life. Key to the discussion is the analysis of the state of Polish culture 20 years after the collapse of communism, and five years after the country’s accession to the EU. One important aspect will involve the funding problems of the many private cultural institutions that have arisen after the fall of communism, during which all (approved) cultural activities were state-funded.

In general, the securing of funds for both private and non-profit or state-sponsored will be a big theme of discussion for the panels. Also, the role culture plays in modern Polish society, the role of the media in publicising culture, and other related topics will be discussed. Some of the honorary speakers include acclaimed Polish directors Andrzej Wajda and Agnieszka Holland.

While most of the sessions of the congress are quite difficult to get into, there will be some accompanying events for the public, such as a concert on the Market Square by Sinfonietta Cracovia and Trio Kroke tonight at 8 pm. Also, there will be live transmissions from the conferences aired in the International Cultural Centre each day from 9:30 in the morning.

For more information and a schedule of events, please see the official website of the Congress.