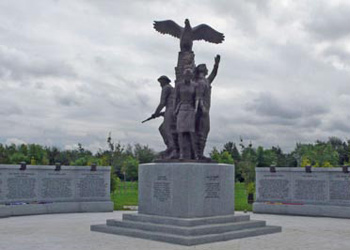 It took many years, but Poles can now say they have a memorial on British soil dedicated to their compatriots who fought under British command in World War II. Unveiled on 19 September, just weeks following the 70th anniversary of the outbreak of WWII, the statue stands in the National Memorial Arboretum in Lichfield, Staffordshire. It is the first memorial solely dedicated to the Poles that were killed fighting in the Second World War.

The memorial depicts four figures, each representing a branch of the Polish armed forces: a pilot from the air force, a member of the Polish navy, an infantryman who fought in the battle of Monte Cassino, and a woman resistance fighter from the underground Home Army. It is adorned with a huge eagle, representing the free Polish republic.

The £300,000 for the cost of the statue was raised over the years by several charities and Polish organisations, and the figures were crafted in Poland by sculptor Robert Sobocinski. The panels that surround the figures were also engraved in Poland, and they describe the trials of the Polish units who fought all over the world in the Second World War.

While for many the memorial has come too late, as more and more veterans pass away, the statue’s sponsors hope that the newest generation of Poles in the UK, those who moved after 2004, will learn about their nation’s heroic past thanks to this memorial.