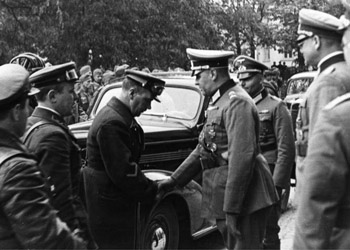 Two weeks ago, Poles marked the 70th anniversary of the outbreak of World War II. While the date 1 September 1939 is widely remembered across the globe, it often overshadows an equally tragic day in Polish history: 17 September 1939.

On this day 70 years ago, Soviet forces, acting on the Molotov-Ribbentrop Pact agreed upon by Hitler and Stalin, invaded Poland. The plan was to divide the country in half, and Poland, left to fight a war on two fronts, was defeated soon after.

Polish President Lech Kaczyński marked the anniversary by speaking in Olsztyn, a city burnt and plundered by the Red Army in 1945. “I demand the truth, and yet bow to millions of ordinary Soviet Army soldiers who died during World War II,” President Kaczyński stated. The truth he refers to is the truth about the Katyń massacre, which he still deems a genocide, despite a ruling yesterday that the events at Katyń be called a “war crime with features of genocide“. “Can it be called anything other than genocide?” he stated. “I dare say that it cannot. And I will not at this moment debate the definitions.”

The president is to also speak at a ceremony commemorating the anniversary in Warsaw this evening.