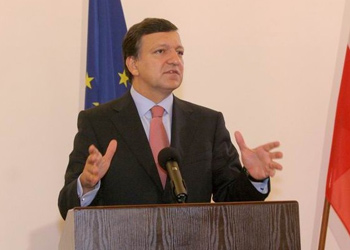 382 votes in favour, 219 against, 117 against all. The socialist faction burned José Manuel Barroso down, calling the 53-year-old Portuguese leader as being “without any initiative, blind for the approaching global crisis and lacking any muscle to fight, now that we are in the middle of it”. But realizing they might have to work with the man for another five years, the socialists were too fearful to actually vote against his re-election and voted none of the above. It sealed a second term for Barroso, despite heavy criticism from both left and right in the European Parliament.

Unanimous support member states
This once more underlines the contrast between national and continental interest. Barroso is regarded in the European Parliament as a weak figure, but is supported unanimously by all 27 heads of state throughout Europe. ”I am pleased to see that the European Parliament today approved the Council’s unanimous nomination of José Manuel Barroso as President of the Commission,” said European Council President Fredrik Reinfeldt. “I want to congratulate José Manuel Barroso on his formal nomination. This gives us the stability needed for fully focusing on important challenges such as the economic crisis and climate change. It is also important for the continuing preparations for a new Commission.”

Centre right coalition
Within the European Parliament, only his own centre Christian democratic party EPP (European People’s Party) backed him from the beginning. “Citizens of Europe supported the EPP during the last election and we support Barroso; he’s a high profile candidate,” according to EPP leader Joseph Daul. The conservative party ECR (European Conservatives and Reformists) finally approved Barroso out of lack of a better candidate, stating through leader Michał Kamiński that “he is against national selfishness and that is why we support him,” while the Liberal Democrats from ALDE (Alliance of Liberals and Democrats in Europe) approved Barroso simply because it had to choose between two evils: “We are not convinced that Barroso is the right man for the job, but inaction is even more wrong in this time of crisis, so we have to take our responsibility and give Barroso a final chance and review him during his mid-term,” stated Guy Verhofstadt, leader of the ALDE faction.

The three parties together formed a majority coalition in the European Parliament and sealed the difficult re-election of Jose Manuel Barroso for a second term of five years, which lasts until 2014. His European committee will see commissioners of the three political colours of this coalition.

Majority against
For a brief moment, the parliamental majority was against Barroso. ALDE, the Social Democrats within the European S-D faction, the socialist EUL-NGL (European United Left – Nordic Green Left) and G-EFA (Green – European Free Alliance) hold 356 seats in the 736 seat parliament, giving the 27 independent members a decisive vote, though they in general also would like to have Barroso replaced.

The newly elected President of the European Parliament, Jerzy Buzek, then mobilized and for a brief moment supported a compromise, which would have seen Barroso being replaced by another political figure representing the EPP. The main candidates to replace Barroso were French Prime Minister François Fillon and Dutch prime minister Jan Peter Balkenende.

Narrow escape
However, the ALDE started to shift with the prospect of having some Commissioners of their political colour in the 2009-2014 European committee. And on the day of the vote, many social democrats decided to vote blanc, instead of against. Martin Schulz stated that Mr. Barroso did not have the support of his S-D group, although he confirmed that the group would meet tonight to make its final decision. “Europe needs a real change of direction,” said Mr. Schulz, and Mr. Barroso would be measured on this basis. He stressed the need for new European laws such as a directive on public services: “This is about your programme, Mr. Barroso; we cannot reduce Europe to just one man”. The move by S-D was criticized by the more left EUL-NGL: “There is a need for a social, peaceful and environmentally friendly Europe and Barroso is the wrong man for president if we want that kind of Europe. We are disappointed that S-D say the same, but are not brave enough to act accordingly.”

Suddenly, a slight majority against vaporised and became a slight majority in favour. It marked the first narrow escape for an incumbent chairman of the European Committee, but not the narrowest victory to date. José Manuel Barroso’s election on 22 July 2004 saw 413 members in favour, 251 against and only 44 blanc votes. But that was nothing compared to Romano Prodi’s election in 1999 (392 in favour, 72 against, 41 blanc). The last hard fought small victory was back in 1994, when Jacques Santer faced an almost equally divided parliament (260 for, 238 against, 23 against all votes). In general, the re-election for Barroso is a mandate of partial non-confidence and a call for action.