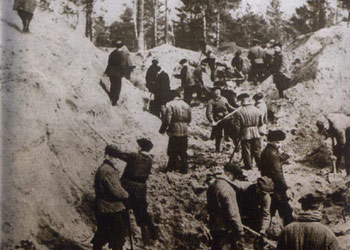 It’s taken two weeks of debating in the Sejm, but finally four parties have come to an agreement regarding a bill that is to condemn the Soviet Union’s role in the Katyń massacre.

The 1940 massacre, in which a total of about 22,000 officers were shot in cold blood by the Soviet NKVD at several sites, will be officially called a “war crime with features of genocide”.

The linguistic battle had been fought between the Law and Justice (PiS) party and the rest over the meaning of the word genocide. PiS, led by Przemysław Gosiewski in the Parliament, had wanted the massacre to be labelled a genocide. The opposing party, Civic Platform (PO), saw the move as one that could damage the already fragile relationships between Poland and Russia. The compromise, which states that the massacre has “features of genocide”, appears to satisfy both sides. The resolution will be passed when the Sejm meets again on 23 September.

One thought on “A Battle Over Words”