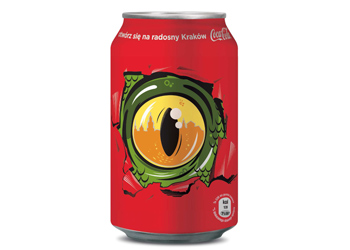 Most visitors to Krakow get to know its mascot, the ubiquitous dragon, sooner or later, but now they’ll have a chance to come eye-to-eye with the beast, so to speak. Starting this week, cans of Coca-Cola sold in the city will be adorned with the famous creature’s eye.

Krakow is the first and only city in Poland to receive its own custom designed can of the carbonated beverage. The design was picked over several other finalists by an Internet vote on the city’s website. The winner, Sebastian Ścigalski, is a Krakow native.

Over a million cans will carry the dragon’s eye, which also features a reflection of the city’s skyline. The cans will be sold in Krakow stores until the end of the year, or until supplies run out.