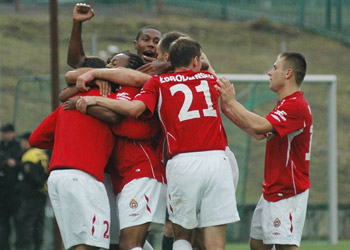 Wisła Krakow is now seriously pulling away in the Polish Ekstraklasa. Winning the away game against Lechia Gdańsk with the least possible margin of 1-0, with the goal scored by Patryk Małecki, the competition dropped points again. Second-ranked Ruch Chorzów lost away to GKS Bełchatów (2-1), while third placed Legia Warszawa had to settle for a goalless draw in Wrocław against Śląsk. Lech Poznań showed a fighting spirit in Białystok against Jagiellonia, working away a 2-0 deficit with Manuel Arboleda scoring the decisive 3-2 in the 88th minute. Lech’s old coach Franciszek Smuda finally managed to lead his new team Zagłębie Lubin to a victory. They won 1-0 away against Polonia Warsaw. Finally, Kraków’s second team, Cracovia, managed to hold Arka Gdynia to a 1-1 draw.

Lechia Gdańsk – Wisła Kraków 0-1 (0-0)
Wisła managed to keep a perfect 100 percent record. With Lechia Gdańsk the “White Stars” faced a tough and well performing opponent. During the last encounter of these two teams, Wisła managed to score within 17 seconds. Now, it had to wait 17 minutes into the second half before finally breaking the deadlock.

In the 60th minute it was Patryk Małecki that received the ball from Paweł Brożek on the right flank. Małecki’s shot on goal deflected and ended in the net. It could have been 2-0 shortly after that, but Krzysztof Bąk saved a shot by Piotr Brożek on the goal line. In the first half Lechia managed to keep up with Wisła, but after the goal the difference in quality was evident and it made the sixth consecutive win a well deserved, yet hard fought, one.

Franek, Henryk or Paweł?
The other focal point of attention is on the national side. Now that it is becoming increasingly evident that the emotional outbursts of PZPN president Grzegorz Lato and later head coach Leo Bennhakker have led to a permanent departure of the Dutch trainer, Polish media speculations hint towards three main candidates for the vacant job; all three of them are active in the Polish Ekstraklasa.

Franciszek Smuda has had a good season with Lech Poznań and is now busy working his way up with Zagłębie Lubin. The most experienced national side coach, Henryk Kasperczak (currently Górnik Zabrze), was also named. He has a lot of experience with African teams but has never coached his native Poland. Finally, a man who already had the Polish side under his wings: Beenhakker’s predecessor Paweł Janas (currently Widzew Łódź). He was national coach from 2003 to 2006, leading Poland successfully towards the 2006 World Cup in Germany, where it lost twice and managed to win only once.