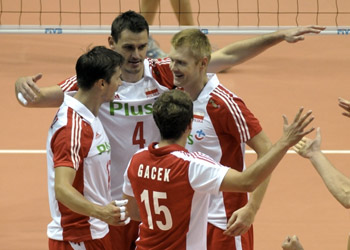 For the first time in history the men’s Polish volleyball team are European Champions. After beating Bulgaria in the semi-finals with a very solid and convincing 3-0, Poland faced France in the final. The French were full of surprises, beating top favourite Russia, and met with Poland for a second time in this tournament held in Turkey. In the first round group encounter between Poland and France, it was Poland that won by 3-1.

Volleyball Final
Poland pulled away in the final, winning the first two sets by 29-27 and 25-21. The French fighting spirit got “Les Bleus” back in the game, winning the third set with ease by 25-16. Poland, if for a minute, became nervous out of fear that their focus and energy peaked too soon. In the fourth set France continued their good performance of the third set, but the Poles kept up the pace with their last breaths. Then at 15-15, Poland opened a gap slowly when the Poles manage to block a French attack by Antonin Rouzier and score while having the serve. The same Rouzier hit the ball way out on 18-17 for Poland, thus allowing Poland to take a two point lead. Rouzier made up for his mistakes and brought France alongside Poland once more in this set. Rouzier was the final’s top scorer with 25 points. Poland’s top man was Piotr Gruszka with 23 points, and it was this man that at 25-24 for Poland got the ball on the right flank and took the championship point with a crushing smash. Poland celebrated, France took the silver home and Bulgaria surprised by seizing bronze from Russia.

EuroBasket 2009
Poland managed to get into the second round at Eurobasket 2009. But in the second round group, Poland is having a hard time. The last game was lost to Serbia (77:72) and it dropped Poland back to fifth place in the second round group, with only two games, against Slovenia and Spain, left to go. Statistically, however, Poland still has the best block and passing figures of the whole tournament. The first four of each group qualify and so far France is the only team to have already done so and be guaranteed a spot in the final eight.

Marcin Gortat criticized the team’s performance: “The third quarter was a disaster. After that, with the score 40:56, we had to make up a gap of 14 points, which is impossible against this good side of the Serbians. Our fighting spirit is our strong point normally, but we did not display that against Serbia. It’s going to be tight now. I expect Slovenia to be a bit stronger than we are and Spain are defending champions. But we play at home and we need the support of the home crowd, to be able to rise to the occasion.”

La Vuelta d’España
The third and final grand cycling tour of this season saw the peloton start two weeks ago in the low countries before heading south to Spain. The battle for the gold leader jersey has been raging between local favourite and current leader Alejandro Valverde (Esp), the surprising young and talented Robert Gesink (Ned) and Cadel Evans (Aus). Just outside the top ten is Sylwester Szmyd. The Pole, racing for Liquigas, is regaining the form he showed in last June’s Dauphiné Liberé (the so-called “mini-Tour de France”), and just in time. In this Vuelta he is limited to being the lieutenant of team captain Ivan Basso, but shortly after the Vuelta ends the world championships commence in Switzerland and with a suitable track for Szmyd, the Pole could go for his own chances there.

Comeback kid Clijsters
The U.S. Open final was one between comeback kid Kim Clijsters (Bel) and the Danish tennis player with Polish origins, Carolina Wozniacki (Den). Clijsters, who was out of the circuit for a long period because of an initial retirement, was sharp as a knife and used the minimum amount of sets to deal with her Danish opponent: 7-5, 6-3 was enough to take her second U.S. Open title. The men’s final is between Roger Federer (Sui) and Juan Martin del Potro (Arg) and will be played tonight.