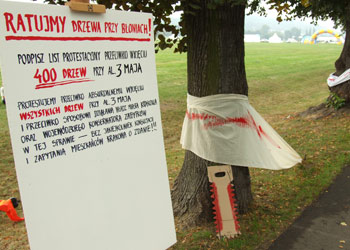 On Saturday afternoon, amidst the usual Cracovians enjoying the weekend at the city’s Błonia Common, the immense open field located in central Krakow, a different sort of gathering was also taking place. The group that gathered with red paint and signs had one goal in mind: to save the trees that line the Błonia.

The City Council has proposed a “renewal” of the trees surrounding the Błonia by removing all of them at once. Some of the trees are over 100 years old, but according to a surveying team hired by the city, are in terrible shape.

The Board of Public Utilities and Transport Infrastructure is the body responsible for the city’s greenery. It ordered a second independent survey, which determined that the trees do indeed need replacing. However, though the protesters acknowledge that the trees should be replanted, they are asking that the process be spread over a longer amount of time. Replacing all of the trees at once would destroy the picturesque image of the Błonia, they insist.

The grievances of the protesters are twofold. First of all, they are calling for an independent and objective survey to be conducted to evaluate the trees’ condition, so that the largest possible amount of trees can be saved. Secondly, the group protests the lack of consultation between the City Council and the public on this issue.

The protest was organised by POE Małopolska, a voivodship-sponsored initiative promoting education and information related to ecological and environmental issues in the area.