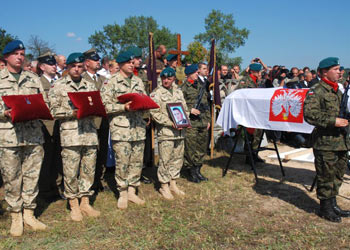 As Americans remember the tragedy of 11 September today, Poles have woken up to word of another tragedy closer to home. Yesterday, another Polish soldier was killed in Afghanistan.

Private first class Piotr Marciniak lost his life in the district of Andar, during an exchange of fire with Afghan resistance fighters. Four other coalition soldiers were wounded, and it is estimated that more than 10 Afghan fighters were killed, including one suspected of numerous terrorist attacks in the Polish-controlled Ghazni province. That province was where just a week ago another soldier, Marcin Poręba, was killed when a mine went off under his armoured vehicle.

The skirmish happened near the Four Corners military base, when the Polish regiment was called in to support a joint American-Afghan patrol. Private first class Marciniak, from the 6th Airborne-Assault Brigade from Krakow, was killed on the spot by gunfire, as medical helicopters were called in to treat the other wounded troops.

30-year-old Marciniak, a veteran of the wars in Bosnia and Herzegovina as well as Iraq, is the 13th Polish soldier to be killed in Afghanistan, and already the third in two months.