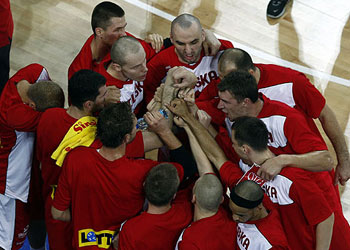 Poland, the host of EuroBasket 2009, started the tournament with a convincing win over Bulgaria (90:78). The Poles opened an 11-point gap in the first quarter, which they maintained up until the end, despite a fierce Bulgarian offensive in the final quarter. Poland’s so called “Twin Towers” – centres Marcin Gortat and Maciej Lampe – scored one third of all the points, although the most points came from Michał Ignerski, who scored 22 points, plus four rebounds. On Tuesday Poland meet with Lithuania, who have lost their first group game against Turkey (84:76). The first three teams advance per group, in a similar way as the volleyball teams.