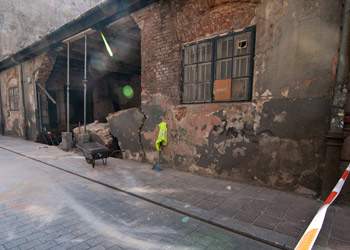 In what could have been a tragedy, a wall collapsed today on Świętego Krzyża Street. The building, at number 16, had been under repair for months when most of the wall facing the street fell onto the street at around three in the afternoon of 9 September.  Minutes later, a fire truck was on hand and members of the fire brigade had blocked off and cleared the street.

No one was injured and no vehicles were damaged – a very lucky coincidence on a street located right in the middle of the Old Town that sees its fair share of foot and car traffic on any given weekday afternoon. But while greater tragedy was averted, the fact that the building is protected as a monument – as are most in the UNESCO-protected Old Town of Krakow – means that any damage to its structure should be considered a loss for the city.

The investor behind the repair work is the firm Awak Sp.z.o.o. from Rzeszów, whose CEO is Jacek Kawa. The construction manager is Jerzy Jaglarz. Neither man was available for comment at the site, though one of the co-owners of the building, who spoke under the condition of anonymity, commented that work has been going on in the building for over two months now, with trucks arriving to clear out rubble from 6 am each morning, “waking up the entire [neighbouring] building”, according to the co-owner. Mr. Kawa owns 25 percent of the building at number 16. According to one worker at the building site, the construction being done was only the “raising of the building’s foundations”, though the co-owner the Post spoke to declared that there was far more debris being removed on a daily basis than would be required for foundation work.

The collapse of the wall of ul. Św. Krzyża 16 has now endangered the structural integrity of the buildings on either side of it. What will be done to repair it is unknown at the moment.