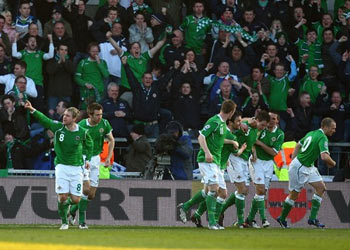 What should have been revenge for the damage done in March in Belfast ended in a narrow escape, placing Poland’s national football team in a tough spot. The 1-1 draw against Northern Ireland means that Poland will have a tough task ahead, if it still wants to qualify for the 2010 World Cup in South Africa.

“Norn Iron” clearly was the better team in the first 45 minutes and the goal scored by Kyle Lafferty in the 37th minute was well deserved. The visitors in green turned ultra defensive in the second half. However, it was Mariusz Lewandowski who headed Poland to a lucky draw. The goal came from nowhere and coach Leo Beenhakker now must see to it, that every game is won from now on. If the team is successful, Poland will finish second and continue to a play-off round, or directly qualify if Slovakia drops in points. But if the Polish team loses another game, Northern Ireland’s four points out of two games against Poland could have proven to be decisive. The next round on 9 September will be crucial.

Next match: Slovenia vs. Poland and Northern Ireland vs. Slovakia (9 September)