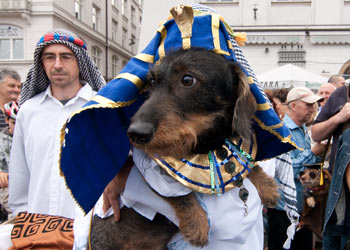 One of Krakow’s weirdest traditions, the annual Dachshund March (Marsz Jamników in Polish) took place this Sunday, with dozens of the iconic short-limbed dogs and their owners participating.

For the 15th year now, dachshund lovers from all over Poland have gathered in Krakow to show off their best furry friends. While some come just for the experience, many go as far as dressing up their sausage dogs in all sorts of elaborate costumes – and some are rewarded for their efforts. This year’s winner of the costume contest featured a coarse-haired pup dressed up as an Egyptian pharaoh, royally escorted by his human companions, who donned Arabic dress and even had a soundtrack for his majesty’s entrance. Honourable mentions went to dachshund police officers, doctors, sportsdogs, and one greying canine who had participated in every year of the march.

The annual parade, sponsored by the Gazeta Wyborcza daily and Radio Krakow, celebrates human accomplishments as well. Each year, a local artist is awarded for the best dachshund-related masterpiece, and a local writer is selected as the winner of the literary competition. This year, Witold Witkowski took the latter prize with his poetic ode to the sausage dog, while the artistic award was scooped up by Agata Stachowicz, for her dachshund earrings.