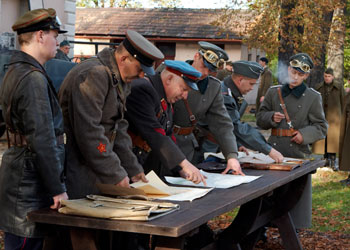 Given the deep and lasting scars that World War II left on Poland, it comes as little surprise that Polish film-makers have constantly revisited the 1939-45 period. Indeed, the first Polish postwar feature, Leonard Buczkowski’s Forbidden Songs (Zakazane piosenki, 1947), was set during the Nazi occupation, Wanda Jakubowska’s Auschwitz-shot The Last Stage (Ostatni etap, 1948) was one of the first Holocaust features made anywhere, and Aleksander Ford’s Border Street (Ulica graniczna, 1949) depicted the Warsaw Ghetto uprising more than half a century before Roman Polański’s Oscar-winning The Pianist (2002).

The first indisputably great Polish WWII films would emerge a decade later via the so-called Polish School, whose leading lights were Andrzej Wajda and Andrzej Munk. Their work was fascinatingly contrasted: in such films as A Generation (Pokolenie, 1954), Kanał (1957), Ashes and Diamonds (Popioł i diament, 1958) and Lotna (1959), Wajda favoured a romantic fatalism of a kind already well-established in Polish literature, while in films like Eroica (1957) and Bad Luck (Zezowate szczęście, 1959), Munk daringly opted for sardonic, often pitch-black comedy. He died while shooting his Holocaust drama Passenger (Pasażerka, 1961), though what remained was impressive enough to be considered releasable even in truncated form. Other outstanding WWII dramas of the period included Kazimierz Kutz’ Cross of Valour (Krzyż walecznych, 1958), Stanisław Lenartowicz’s Pills for Aurelia (Pigułki dla Aurelii, 1958) and Jerzy Passendorfer’s Answer to Violence (Zamach, 1959).

The war remained a popular subject throughout the next three decades, each year typically seeing two or three examples. Passendorfer’s two-part 1969 epic Heading for Berlin (Kierunek Berlin) and The Last Days (Ostatni dni) offered vivid large-scale recreations of the push to Berlin, albeit compromised by the films’ unashamedly pro-Soviet line. Andrzej Żuławski’s hallucinatory debut The Third Part of the Night (Trzecia część nocy, 1971) was a more psychologised take on wartime trauma. The collapse of communism and the ensuing funding crisis for ambitious period dramas has meant significantly fewer WWII films since 1990, though high-profile exceptions include The Pianist and several films by Wajda.

Wajda remains Poland’s greatest cinematic chronicler of the WWII experience, not least the often-marginalised story of the fate of Poland’s Jewish population. After his initial quartet, his other WWII films include Samson (1961), Landscape After Battle (Krajobraz po bitwie, 1970), Korczak (1990), The Ring with the Crowned Eagle (Pierścionek z orłem w koronie, 1992), Holy Week (Wielki tydzień, 1995) and most recently the sombre, moving Katyń (2007), a dramatisation of the Soviet war crime that took his own father’s life, though the film is as much about the impossibility of discussing the massacre under Soviet occupation as it is an elegy to its victims.

Michael Brooke is the creator of Kinoblog, a treasure trove for enthusiasts of Central and Eastern European cinema. He is a regular contributor to several UK film magazines.