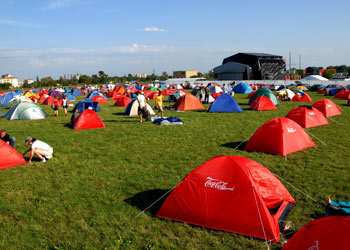 This year’s Coke Live Music Festival gathered Polish and international fans of rock, reggae and hip hop artists such as 50 Cent, The Killers, The Streets, Shaggy, Nas, Gentleman and James. Those who have attended this Cracovian summer attraction year by year have witnessed the evolution of the festival. Four years ago at the Wisła stadium, when the first edition took place, a much smaller audience arrived for a one-day musical event. This year, the festival lasted three days, and it has moved to the old runway of the city’s Aviation Museum. Mikołaj Ziółkowski, head of Alter Art, the promoter of the Coke Live and Heineken festivals, explained at a press conference the direction towards which the Polish music market has been evolving: “Since the first edition, not only this festival, but generally the music market in Poland has developed considerably and we are in a completely different situation now. After years we are in a room that is full of journalists and we are starting a new edition with over 30,000 people. After four years, the target group able to buy a ticket and come to a concert is growing bigger and bigger. Compared to the 90s, now the group coming for the gigs in Poland is three or four times larger. The goal of this festival is not to be only local but definitely more open for visitors from other countries.”

The event also happened to be a good opportunity to promote educational agendas. By introducing ecological fairs and performances as a part of the festival’s activities, organisers encouraged the audience to take an active part in the “cleaning-after-the-festival” project. Coke Live’s partner Rekopol Recycling Organisation organised a competition that youngsters enjoyed the most. Collecting twenty or forty empty plastic cups and trading them at the Rekopol Fair resulted in getting hats, t-shirts, and bags made of recycled PET plastic bottles. During the second day of the festival a 10-person group broke the record by collecting 577 cups. Within the area of the Aviation Museum, participants could also find information packages on how to recycle. Wojciech Dubasiewicz from Coca Cola said: “We have been promoting recycling for many years. But this is the first edition where we decided to speak to young people because they are much more into being eco-friendly. We have prepared thousands of containers and we expect to collect tonnes of plastic waste.”

The festival included many alternative attractions for less active participants. This year’s invention – the Coke Clinic relaxation area – enjoyed popularity during the long lasting and draining concerts. The Coke Clinic occupied two large tents. The first was designed for massage amateurs and the second was for those who wanted to experiment with a new haircut or refresh their make up. Moreover, the Coke Clinic’s staff offered henna tattoos and aromatherapy, besides creating an “urban beach” in the middle of the runway with a view onto the main stage.

The festival earned new brownie points this year. The audience was clearly satisfied by the concert’s programme and the other attractions, which the organisers paid a good deal of attention to during the 2009 edition. Returning star Shaggy rustled up a great performance once again, his enthusiasm clearly infectious for the following artists. We will see shortly if the environmental aspects of the event will play an equally key role in the Polish festivals planned for next year.