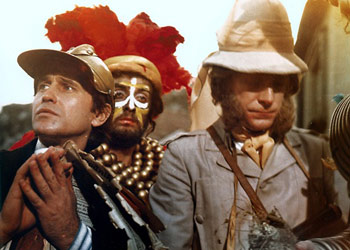 Four Polish film-makers have been highlighted in a list of the world’s most visionary directors. The roster of radical talent was put together by Sight and Sound, the British Film Institute’s long-standing journal.

For these fellows, the expression “colourful character” does not seem to do full justice. Krakow-born Wojciech Has is best known for surreal flights of fancy such as The Saragossa Manuscript and The Hourglass Sanatorium, the former a favourite of Martin Scorsese, Francis Ford Coppola, and Jerry Garcia of the Grateful Dead. Walerian Borowczyk won a BAFTA for best animated film in 1960, completing his career making raunchy flicks such as Doctor Jekyll et les Femmes. Skolimowski saw out spells as a boxer, jazz musician, novelist and screenwriter before taking up the director’s baton, whilst Andrzej Żulawski was once sued for defaming the Russian soul after his epic Boris Godunov. Speaking generally about his approach to directing, the ever-understated Żulawski said the following:

“To please the majority is the requirement of the Planet Cinema. As far as I’m concerned, I don’t make a concession to viewers, these victims of life, who think that a film is made only for their enjoyment, and who know nothing about their own existence.”

Żulawski will not be directing the final Harry Potter instalment.