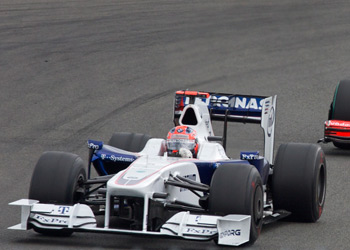 The championship is open again in Formula One and so is the silly season. In a wicked Grand Prix weekend, it was last season’s slowest driver turning out fastest at the official qualifying: veteran Giancarlo Fisichella (Team Force India) took pole position, with the championship contenders trailing far behind.

Kimi Räikkönen (Scuderia Ferrari) accelerated from sixth to second after the first corner, when shortly after the two new kids on the F1 block – Romain Grosjean (Team Renault) and Jaime Algesuari (Scuderia Toro Rosso) – bumped out the entire English contingency of Jenson Button (Team Brawn GP) and Lewis Hamilton (Team McLaren). A safety car came out and after the race restarted it was Räikkonen who was quickest again, overtaking Fisichella for the lead.

With the exception of Fernando Alonso (Team Renault) falling out, the race remained consistent up ahead. Because of Hamilton, Button and Alonso dropping out, as well as Jarno Trulli (Team Toyota, who started second) and Rubens Barrichello (Team Brawn GP) the BMWs of Robert Kubica and Nick Heidfeld suddenly emerged as the main drivers going for the last spot on the podium. The team, which is to withdraw from Formula One soon, proved to be mighty quick on the Belgian low down force circuit.

In the end, Räikkönen brought the Ferrari to the finish first, despite Fisichella being surprisingly quickest of them all. His second place provided the first points ever for Force India. Sebastian Vettel (Team Red Bull) outmaneuvered the two BMWs with clever tactics in the pit lane and came in third. But the moral victory went to Kubica and Heidfeld, finishing fourth and fifth, ending a string of bad news and bad results.

Jenson Button still holds a 16-point advantage over teammate Barrichello, while Red Bull racers Vettel and Mark Webber also closed in a little bit. With just slight changes in the world championship ranking, the talk of the weekend was who will drive where (and what) next season. Obviously, with one team stepping out, two rumoured to leave and three fresh teams to enter Formula One, things are heating up.

Robert Kubica has done excellent business, scoring six points in his last two races and quadrupling his tally to eight points. He is rumoured to fill up any seat available. Alonso has been said to have signed a deal with Ferrari, while Räikkonen has stated he is still uncertain about his future in Formula One. Kubica has been linked to a seat at Renault, also because the second seat is vacant after Nelsinho Piquet’s departure.

The same Piquet hopes that his father will buy out BMW, hence guaranteeing him a seat at whatever the team will be called next season. Another rumour going around is that Williams is likely to race with Mercedes engines next year. Heikki Kovalainen (now McLaren) and Niko Rosberg (now Williams) would swap places and Williams would also acquire the disappointing Keisuke Nakajima, who has remained in the team due to sponsor demands by Japanese engine supplier Toyota. The second seat would be filled up by, you guessed it, the only Pole with a Formula One pace.

Whichever way the wind blows, Formula One continues on 13 September on the Italian high speed Monza track, with Giancarlo Fisichella likely to be making the switch to a temporary Ferrari seat until Felipe Massa returns, replacing the appallingly slow Luca Badoer. There are still five races to go and all the transfer options are still open, so no doubt Formula One will draw quite some attention, now that the football transfer season is over and the Formula One transfer season is about to open.