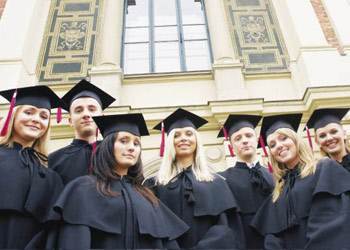 Welcome to Krakow – along with all its other attributes without doubt a great student city. Indeed, with close to 200,000 young people enrolled in some kind of study programme out of a total population of three-quarters of a million, it is no exaggeration to say that Krakow becomes an entirely different place at the end of September, as the students return for another academic year. And while it has some way to go to near the dizzy heights of the “Golden Age” of the 15th century, when at one point some 44 percent of the students of Krakow Academy – as the Jagiellonian University was then known – were non-Poles, today the city is rediscovering its charm for international students.

It is the Jagiellonian that most readily springs to mind when it comes to higher education institutions in Poland. And that’s not just for me, although I should nail my blue and gold colours to the mast and declare that it is my employer of which I speak. Founded in 1364, it is the oldest university in the country, and for now at least rated the best (so says the Polish edition of Newsweek). It is also the largest such institution in Krakow, and was until recently the only one officially able to entitle itself “university”. The city now boasts two more, both formerly “academies” – the Cracow University of Economics and the University of Agriculture in Krakow (sooner or later, everyone has to opt for either the ‘K’s or the ‘C’s in our city’s name) – as well as the Cracow University of Technology (a politechnika in Polish), the AGH University of Science and Technology (an academia), the Tischner European University (a “higher school”) and the Andrzej Frycz Modrzewski Krakow University (recently renamed as an academia). All of these institutions and more welcome international students to their labs, lounges and lecture theatres every semester.

The Jagiellonian alone accounts for around 50,000 students, and the largest chunk of the city’s international students also attend the institution known most often as UJ (pronounce it in Polish – ‘oo yot’ – for added gravitas). While some take full degree programmes alongside the local students, they are in the minority. UJ offers several graduate-level degrees and undergraduate study abroad aimed at international students and taught in English, notably at the Centre for European Studies, which has run MA in European Studies and Central and Eastern European Studies programmes for the last decade and which participates in several consortium programmes with partner universities elsewhere in Europe, and also runs the TransAtlantic MA programme at the Institute of American Studies. The School of Polish Language and Culture operates a successful and long-running summer school for students with Polish heritage or just an interest in the country, while the university’s Medical College teaches programmes in English to international students, including many Norwegians. And then, of course, there are students spending a semester or year abroad on a scholarship, most obviously Erasmus.

New Erasmus students arriving in September will sooner or later need the friendly advice of Krzysztof Byrski at the UJ International Student Office. And every year he and his colleagues acquaint increasing numbers of students with the intricacies of course registration, student documents and university residences. “This semester we’re expecting around 350 for the autumn and whole year, which is up from last year,” he says. “Usually the largest group is Germans, but it looks like the Spaniards are giving them a run for their money this time round, followed by French and Turkish students.” Byrski says that the international students he deals with almost always enjoy their time in Krakow, and even sometimes rave about their courses. The stereotype of Erasmus students in particular is that their learning experience is often based more around the nightlife than their studies, but Byrski quotes examples of students who have attended Polish survival courses after arrival, spent a semester studiously learning the language, and then even moved on to regular courses in Polish in their second term. The most common problem? “Housing. Often people are not prepared for what Polish student residences are like. And those who live in private flats sometimes come to me with problems with their landlords. The Erasmus Student Network runs a mentor scheme, and usually they can help or we’ll find some other solution.”

Apart from dorm rooms, which might, according to what they’re used to, seem Spartan, cramped, but also cheap to some international students, studying in Poland, especially at a tradition-laden place like UJ, might quickly bring on a heavy bout of academic culture shock. The Polish derivative of the Humboldt system traditionally means professors with great power (and woe betide you if you call them “doctor”!), cancelling classes, arriving late, perhaps not grading too conscientiously or all that easy to contact, along with a decentralized, disparate student lifestyle in which the individual has to find resources and information himself and student services are limited. Things are without doubt changing, though, and international students will often witness a mixture of academic approaches and systems.

Krakow, the student city, is a trap – as one UJ professor is fond of telling his newly arrived recruits. Many students, international or otherwise, soon come back for a further programme, or do their best not to leave. If you’ve just arrived here, let’s see if you do the same. Others among you may just already know what I’m talking about.