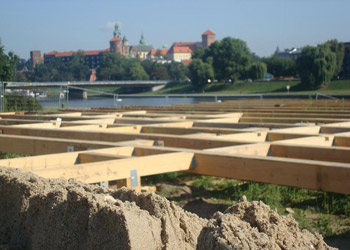 It was supposed to be finished last year. Then the grand opening was scheduled for this summer, but the holidays are almost over and there is no sign of a beach.

It is an impressive project: 10,000 m2 of golden sand, a 25-metre pool with an additional 300m2 swimming area in the Vistula River, a volleyball court, a park for kids, a spa, a restaurant, a night club, sauna and jacuzzi, a fitness club, a multi-functional area/stage, and an outdoor summer theatre. The question is, when will we be able to enjoy all of this?

When SAO Beach Investments, lead by Mr. Filip Adamczak, proposed a plan to build a beach in Krakow over two years ago, there was a wave of excitement. City clerks and conservators enthusiastically lobbied for the concept and the beach became one of the most anticipated projects in the city. It was also a sentimental project; older Cracovians remember a time when there was a natural beach by the Vistula, closed in the 70s due to rising water levels. It all looked good on paper but, after the hype wore off, reality began to interfere.

The project began in the spring of last year and the initial deadline for the opening day was set at July 2008, but construction had to be stalled until a building permit was obtained, an issue which took months. Then, the conservators requested archaeological tests that resulted in rumours that a bomb (possibly left from WWII) had been found during the excavation. All of the technical issues were finally resolved by the summer of this year and actual construction began. Wooden beams were quickly put into place in July and then… nothing.

I visited the “beach” mid-August because, according to Mr. Adamczak’s promises, it was supposed to be finished by that time. I came to the site and only saw the wooden construction. Oh, and a pile of sand which would not even fill a sand pit. There were no workers, there was no machinery, there were no materials; nothing but the wooden beams that will, one day, be covered by a floor.

There is much to be done. Well actually, there is everything to be done. The next phase requires building upwards – a building for the administrative and gastronomic section of the beach. Then the sand will be delivered, followed by a lighting system that aims to make the complex bright and safe. And lastly, the crowning moment will be the placement of the pool.

All this done by the end of this summer? Seems hardly likely considering the slower-than-snail’s pace that has plagued the work site from the very beginning. One thing is certain though, when the beach finally opens, whenever that will be, it definitely will be worth the wait.

See the official website at www.plazakrakow.com for more information.