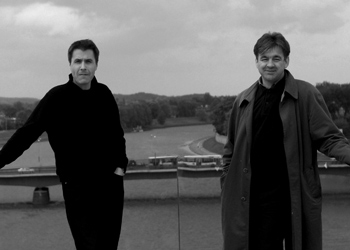 This month, My Life becomes Our Life as we interview famed architects Piotr Lewicki (left) and Kazimierz Łatak (right), who have been working together for 21 years. Their firm, Biuro Projektów Lewicki Łatak (Lewicki Łatak Project Office), has designed such Krakow landmarks as the Bohaterów Getta Square and the Czartoryski Princes Square, and their current projects include a footbridge over the Wisła and the redesign of Plac Nowy.

If you could live anywhere in Krakow, where would it be, and why?

PL: In the Aleje, in one of those big inter-war tenement houses, high up above the ground. A big flat, two joined ones would be the best. Or even closer to the city centre – Krowoderska Street or Łobzowska Street. Or closer still – in Sławkowska or Św. Jana Streets. Or, perhaps at the Market Square, I don’t know.

KŁ: Footbridges! A lot of footbridges over the Vistula!

PL: I would search for Barbara Radziwiłłówna [an ill-starred queen, said to haunt Wawel] … Apart from that, car parks, under each square. The more floors down the better.

What’s one place tourists can’t miss when in Krakow?

PL: And Zaułek Niewiernego Tomasza [Doubting Thomas’s Corner], that is the way one can, perhaps, understand Krakow. And, of course, some self-promotion: the new Zgody Square.

Both: Of course: Kazimierz.

PL: That was the Kazimierz district I had in mind, not Kazimierz Łatak.

PL: To Czesław Dźwigaj. It would be best if it were carved by Czesław Dźwigaj. But speaking seriously, to Bohdan Lisowski, our professor from the Faculty of Architecture at the University of Technology. He died a dozen years ago; today’s students don’t know him. And to Prince Władysław Czartoryski who installed his family collection in Krakow.

KŁ: Yes, to Lisowski. And besides, our master is Professor Mańkowski.

Both: Dynia! On Krupnicza Street! Apart from that, Mamma Mia on Karmelicka Street, and the garden in La Campana (Kanonicza Street).

PL: I would add Farina and Al Dente.

PL: Dym is the best. It is simply out of the competition.

PL: Drunkards at our workshop. We have our premises on the ground floor and the windows open to the pavement, and one can hear all the dialogues. And, naturally the Krakow salon, full of moral aggressors: fünfundzwanzig Professoren.

PL: By bike to Dym. Then to Plac Nowy – to Alchemia, next to Nadwiślańska Street, to Drukarnia or to Cava. There is no footbridge yet, but when it is created, traversing the Wisła – that will be an experience, mmmmm. From Podgórze back to the city via Plac Nowy, then along Grodzka Street to the Market Square.

KŁ: To Kamień near Krakow. My hometown and one of the three best places to live in the world.

PL: Tell us about the other two…

KŁ: It is quite obvious: Krakow and New York.

PL: I’ve already said that… I don’t walk. By bike around the Old Town.

KŁ: Pierogi! The best are in Nostalgia, conveniently close. I won’t mention Stasia as it is a legend in itself.

PL: Nonsense, neither of them. A nice salad in Dynia. With apple juice and lemon.

2 thoughts on “My Life: Piotr Lewicki and Kazimierz Łatak”