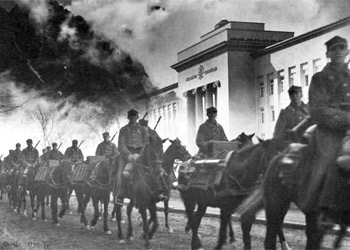 In this second half of a two-part article (part one here), William Brand focuses on the city in the first days after the outbreak of war.

World War II began when Germany attacked Poland early in the morning on 1 September 1939. The first nation to refuse to give in to threats from Hitler, Poland was the only country to be at war against Nazi Germany from the first to the last day of the conflict.

This makes it all the more ironic that the first days of September, 70 years ago, left such light material scars on Krakow, and that the inhabitants of the city passed through that dramatic time in bewilderment, confusion, defiance, and resignation. Understandably, they had no idea of how long the war would last, and what a ghastly price their country and the world would pay over the years to come. It may seem more surprising to us that they knew hardly anything about what was going on in their city or its immediate environs at the time.

High-school student Kazimierz Albin had turned 17 two days earlier. He and some fellow scouts were bicycling back to Krakow down the old Zakopane road from Swoszowice. They had spent the last few nights guarding bridges against German saboteurs. They paused to admire the panoramic view of the city, when they noticed airplanes circling. They recognized them as German bombers.

Air force ground crews at the old airport in Czyzyny were eating breakfast in their barracks when they heard aircraft approaching and rushed out to see if it was their squadron returning from the dispersal fields they had flown to the afternoon before. Instead, they saw dive-bombers swooping down on the empty hangars, and explosions engulfing those structures.

Luftwaffe pilot Frank Neubert of the Immelmann-Geschwader turned homewards after the sneak attack on the airfield. He saw a Polish fighter taking off from an expanse of open ground below and ahead of him. Neubert had the sun at his back. He calmly lined up his shot, and the P.11 piloted by Captain Mieczysław Medwecki, commander of the Krakow Fighter Squadron, disintegrated in the air, and came down across the field it had just taken off from.

The Germans bombed the airport, the train station, and the army buildings along Rakowicka Street. Their high-level bombing was not very accurate on the first day, and they destroyed one building in the center of town, on Warszawska Street, where the Sisters of Mercy ran a canteen and shelter for indigent students. It was empty – everyone was still on vacation. The site remained vacant for 40 years.

People all over town rushed to their windows or balconies to watch the attackers, the Polish pursuit, and the anti-aircraft fire from such strongholds as Kopiec Kosciuszki. At first, many thought it was some kind of exercise.

Even as soldiers were marching westwards through Krakow that afternoon towards the front lines, the first ragged refugees, many on foot, were arriving from Silesia.

Most people spent the day glued to their radios. The Polish stations were broadcasting constant reports of victories, interspersed with enigmatic coded messages. There was nothing to suggest to the audience that the Germans had managed to penetrate the border defenses anywhere. People went out in the evening, and the movies and theatres were said to be packed.

Crowds of young men besieged the army recruitment headquarters at the corner of Warszawska and Szlak, but they were turned away. Rumours spread that all of the army’s supplies were in the east somewhere, and that volunteers should head that way to join the army. Soon, the radio was broadcasting the same news.

People were making plans in response to rumours. The Germans were supposedly using young men as human shields, or shipping them straight to the Reich as slave labourers. Jewish men of all ages were supposedly at risk, although the Germans would never do anything to women and children.

Along the old road near Swoszowice, Kazimierz Albin witnessed the bombing of civilian refugees for the first time: mangled people and horses, scattered belongings, and sheer panic. He also saw Polish soldiers coming the other way, exhausted and reporting that they had been retreating and fighting all the time since the previous morning.

The radio continued to report Polish victories, and then, at noon, came the joyous news that France and Britain had declared war on Germany. Juliusz Feldman, 15, who lived near the main road leading out of town to the east, saw soldiers marching that way and wondered why they were heading away from the front lines. A bomb struck a troop train near a railroad bridge not far away, and Feldman and his father grabbed shovels and went to help repair the damage. Later, they saw Silesian Line buses heading east, carrying the families of government officials from Katowice. Commissar Czuchajowski, the government official in charge of Krakow, joined the pre-planned evacuation.

Passenger trains had been cancelled. The streets and all the roads out of town were blocked by the crush of cars, trucks, and carts piled high with people’s belongings. It looked like a village fair on a vast scale.

The hejnał was played for the last time. The firemen gathered at the fire station to decide whether or not to follow the police out of town.

As Feldman and his neighbours watched the road, he wrote later, “We began to feel true fear. We started seeing acquaintances from town, wearing light clothing and carrying small travelling cases, walking along with no specific destination.” The radio kept carrying news of fresh victories, but Feldman noticed that “there was not a single Polish airplane to be seen.”

In suburban Swoszowice, Albin and his fellow scouts saw their first Germans, a mounted scouting party. Albin took aim as the Germans got off their horses and began looking through their binoculars, perhaps at the same panorama Albin himself had been admiring in the first minutes of the war. Before he could get a shot off, a German squad car approached, and the boy scouts had to retreat.

The Slovak Army, along with a German Einsatzkommando, were in Zakopane, although it is doubtful that anyone in Krakow knew this.

The political deadlock that had prevented the city council from electing a mayor all year came to an end when those members still in town voted Stanisław Klimecki into office.

Looting spread throughout the city, and people not interested in joining were afraid to venture out into the dark streets at night.

Rumours said that saboteurs had poisoned the water supply, while the radio declared more victories.

Somehow, General Bernard Mond had held the 6th Infantry Division together through some of the worst fighting in the Pszczyna Corridor. Since then, he had led them slowly eastward along the right, or south bank of the Vistula, trying to fight a rearguard action against the far superior German forces behind them while attempting to fend off flanking attacks from the south that threatened to encircle two whole Polish armies. Now, Mond’s troops passed Skawina on their way to the Niepołomice Forest, where they would finally turn and take up what they thought might be a tenable position. They still had a lot of fighting ahead of them, but Krakow now lay exposed from the west and south.

Mayor Klimecki and the city fathers decided that afternoon (or well past midnight, according to other accounts) to declare Krakow an open city. Klimecki drove to Kopiec Krakusa and Kopiec Kościuszki to supervise the erection of gigantic white flags.

Irregular trains had been running eastwards on both tracks of the main line, but now they stopped.

Andrzej Chwałba, a Jagiellonian University professor and the author of Volume Five of the History of Krakow, writes: “Many were swept by a feeling of impotence and helplessness. This led to the resignation and passivity that later came to be known as the ‘September syndrome’.”

Less than two days after becoming mayor, Stanisław Klimecki, according to one report, heard gunfire from the direction of the Piłsudski Bridge at around six in the morning. He drove to investigate, down Grodzka, Stradom, and Krakowska. When he heard a gunshot near the bridge, he stopped in the middle of the empty street and waved his handkerchief out the window. A soldier, pistol drawn, approached warily and asked in German, “Who are you?”

“Get out and come with me.”

Chwałba reports that when the first German troops reached the Rynek, they drove around and around, and then stopped to pass out candy to Polish children as a propaganda crew filmed them.

Later that morning, Juliusz Feldman heard gunfire from the direction of the Old Town. He went out to the main road and saw three motorcycles speeding towards the city from the east. Their helmets looked like German ones, but they had tricolour insignia of a kind Feldman had never seen before. He ran home elated, to tell his family that the French had arrived. By then, however, word had finally filtered through that the Germans were in Krakow. Nevertheless, people were saying, it was only a tactical manoeuvre, and the Polish army had withdrawn so that they could lure the Germans in and then recapture the city. Later, Feldman saw Polish troops being marched along the main road as prisoners under German escort.

Lying on a bed in the Krakow ghetto several years later, he wrote in his notebook that after dinner on 6 September, he went out onto the balcony. “And then, for some reason, I began to cry, I don’t know why. The tears simply came when I thought about what had happened. We had lost, we had been defeated.”

Of the people mentioned in this story, Juliusz Feldman was imprisoned in the Krakow Ghetto and Płaszów concentration camp, where he was assigned to work in an “outside” crew that salvaged furniture after the liquidation of the ghetto, renovated it, and delivered it to German officials posted to Krakow. While in the ghetto, he began keeping a diary about his wartime experiences. The diary was discovered after the war. The last entry dates from early 1943; nothing is known about the author’s fate.

Kazimierz Albin was arrested trying to make his way to the west to join the Polish army there. He was tortured, imprisoned, and sent to Auschwitz in 1940 on the first trainload of prisoners deported there. He was classed as a “Polish political prisoner”. He escaped from Auschwitz, fought in the underground in Krakow, became an executive in the aircraft industry, and is now a member of the International Auschwitz Council.

Dr. Stanisław Klimecki, who was mayor of Krakow during the last two days before the Germans took over, was held as a “hostage” for the good behaviour of the citizens during the first weeks of the occupation. The Germans later arrested him on several occasions, sending him to prison and Sachsenhausen concentration camp before executing him in the Niepołomice Forest on 11 December 1942.