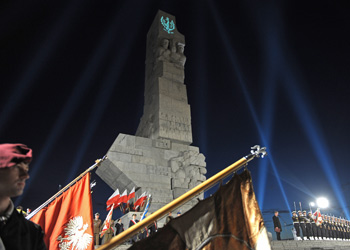 Gdańsk, the largest of the three cities that form the Trójmiasto (tri-city) agglomeration by the Baltic Sea, boasts a special place in Polish history. The birthplace of the current prime minister, Donald Tusk, it has also been home to three other presidents: Lech Kaczyński, the incumbent, was a law professor at the local university, where Aleksander Kwaśniewski, his predecessor, famously failed to complete his degree. More significantly, Lech Wałęsa was a shipyard worker here before winning the Nobel Prize for his role as the leader of the Solidarity trade union, the beacon of non-violent resistance to communism.

But its place in world history was assured 70 years ago when on 1 September a German assault on the Polish military outpost in the then ethnically German Free City of Danzig proved the starting point of World War II. Three days later France and Britain joined the war but declined to take any action until the May 1940 invasion of France, with the intervening period going down in history as the “phoney war”. On 31 August, David Miliband, the British foreign secretary, expressed in daily Gazeta Wyborcza his “regret” at the allies’ “inability” to help.

More significantly, the same newspaper published a letter by Russia’s Prime Minister Vladimir Putin, whose fleeting visit was the highlight of the anniversary ceremonies. For, while memory and interpretation of WWII and its aftermath in Poland continues to be quite different from Western Europe, it is in relations with Russia that it leads to conflict.

Putin, a former Soviet spy (though he himself famously said, “there’s no such thing as a former Soviet spy”), has made restoration of Russian pride central to his government’s legitimacy. The Great Patriotic War, as it is known in Russia, is key to this agenda. Thus, the vanquishing of fascism was a Soviet gift to mankind and to Central Europeans in particular. Under this reading of history, Polish hostility to Communist rule is simply ingratitude, and the collapse of the Soviet Union is the greatest tragedy of the 20th century. As Putin explains, “Russia and Poland were allies in this righteous battle” – no mention is made of Soviet participation in the invasion of Poland or the loss of Polish independence after 1945.

Hitler preceded the invasion of Poland with a secret agreement with Stalin to partition Poland, known as the Molotov-Ribbentrop Pact after the foreign ministers who signed it. In a significant departure from his rhetoric to date, Putin condemned the pact, describing it as “immoral” during his brief speech on 1 September. Yet in his more in-depth published letter, he also alleges Western plots to attack the Soviet Union together with Hitler.

Putin highlights Poland’s taking of disputed territory from Czechoslovakia, even as Hitler claimed Sudetenland in 1938. And his mention of Katyń, where Stalin had over 20,000 Polish officers massacred, is hedged with reference to Russian prisoners of the 1920 war, allegedly mistreated by their Polish captors.

The Russian leader praises recent cooperation with Germany, which has fuelled Polish insecurities. The planned pipeline under the Baltic Sea would allow gas exports to bypass Poland, raising the prospect of a cut-off that would leave Russian business with Germany, the biggest market for its natural resources, unaffected. Radosław Sikorski, Poland’s Oxford-educated foreign minister, has likened the pipeline deal to the Molotov-Ribbentrop Pact.

Relations with Germany are friendlier, following apologies for past crimes and support for Poland’s EU accession. Tensions, however, remain, as the Germans who fled the Red Army or were forcibly removed from the eastern Reich, when it was incorporated into Poland to compensate for the loss of much larger territories to the Soviet Union, repeatedly create bad blood with their financial claims. Few Poles, however, share the sentiment of Jarosław Kaczyński, who, as prime minister in 2007, said it would be unfair to base countries’ voting weights in the EU on population since, had it not been for the war, there would have been over 10 million more Poles. Where he got his numbers from remains a puzzle. Poland’s demographic losses continue to ignite scholarly debate, though there is no doubt that these were incomparably heavier than in Western Europe. Where France or Britain lost under 2 percent of their populations, Poland’s losses were ten times higher or more. Upwards of 5 million people perished with some estimates twice as high. Out of these, 3 million were members of Europe’s largest Jewish population. Where survival rates for Jewish-Poles were under 10 percent, “Aryan” Poles had 70-80 percent chances of survival. But, according to a recent poll, Poles believe they suffered more than any other group, Jews included. This, coupled with denial about a minority of Poles who more or less actively took part in the victimisation of Jewish compatriots, and about the continued presence of residual anti-Semitism, provides ample fuel for the persistent tensions between the two communities – exacerbated by refusal of many Jews to admit the extent of Polish heroism in saving Jewish lives and disproportionate fears of anti-Jewish prejudice.

All these themes – fear of and conflict with Russia; friendship, though not without reservations, with Germany; disappointment in Western European allies; a difficult relationship with Jews – continue to shape Polish attitudes decades after the war. When the French denounced Poland as America’s “Trojan ass” in the wake of the Iraq war, they showed scant regard for how the U.S.’s role in defeating Nazism and communism (and their own inaction in 1939) contributed to Poles’ view of a close alliance with the global superpower as the only realistic security guarantee. That is also the reason for Poland’s eagerness to host U.S. missile defence installations. But the Obama administration has been cool on the costly project and apprehensive that Poles might use the Gdańsk ceremonies for negotiations. Hence the U.S. only sent a former secretary of defence, William Perry, a snub bemoaned by the Polish media, and yet another sign of how this country’s love of America remains unreciprocated. From Putin’s own perspective, the missile shield has been a continual source of frustration. A vehement critic of the enterprise from the outset, he suggests that it is more a threat to Russian security than a so-called defence mechanism against Iran.

At Westerplatte, Polish Premier Donald Tusk alluded to the missile controversy without speaking outright on the topic. He reflected in his speech that “we are all deeply convinced that the memory of this destruction [of 1939-1945]… is the most important, the most effective shield against war.” However, whether rhetoric can be translated into reality remains to be seen.