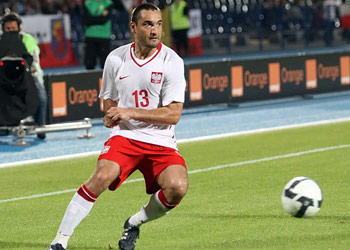 Roger Guerreiro moves into Europa League
All the leagues are now underway and the draws for the European group stages have taken place. For the Poles active at their English, Russian, French and Greek clubs that participate in Europe, some very challenging fixtures await. Arsenal (Łukasz Fabiański and Wojciech Szczęsny) meet Olympiakos (Michał Żewłakow) in the UEFA Champions League, whereas Rafał Murawski, who transferred to Russian title holders and Champions League debutants Rubin Kazan, faces off with Champions League title holders FC Barcelona and Italian champion Internazionale Milan.

Another Polish international playing Europa League football will be Roger Guerreiro, who transferred from Legia Warsaw to AEK Athens for a reported 250,000 euro. He saw his team being drawn into a group with English side Everton FC, Portuguese giants Benfica and the surprising BATE Borisov from Belarus. Rumours of a possible transfer for Paweł Brożek (now Wisła Krakow) to Fulham FC will possibly see the striker of the Polish national side scoring his goals against AS Roma, FC Basel and CSKA Sofia from Bulgaria, when Fulham makes his debut appearance in the Europea League.

One person who will not participate is Marcin Wasilewski. The right back of Belgian runner-up Anderlecht and the Polish national team fell victim to a horrific tackle by Axel Witsel, during the top clash in Belgium between Anderlecht and Standard Liege and is out, at least for an entire year, but a career end is also likely. Wasilewski has a double fracture of the shin bone and also a double fracture of the heel bone. There were some exciting games up ahead for Wasilewski at the Polish national team and his club. Anderlecht were drawn into a group with Ajax Amsterdam, Dinamo Zagreb and FC Timisoara in the Europa League, the successor of the UEFA Cup, the tournament Lech Poznań failed to qualify for after having been eliminated by FC Bruges on penalties.

Wisła far ahead, Lech completely out of form
Lech Poznań knows it has had a troubled period. It has been without a win for the last four matches. The last one, a home game against GKS Bełchatów in the Polish Ekstraklasa, ended in a 2-2 draw. Things could have been worse, however, had attackers Robert Lewandowski and Hernan Rengifo not levelled the score after Lech was down 2-0 after 50 minutes. The team has now been overtaken by Piast Gliwice in the rankings and fallen back to seventh.

To Wisła Krakow, it was all business as usual. Even the far trip to the north-east of Poland did not tire the defending champions at all. Against Jagiellonia Białystok, the “White Star” side was 2-0 up after only 30 minutes, via goals by Junior Diaz and Paweł Brożek, possibly his last for Wisła, although he keeps denying a transfer, even on the official Wisła Kraków website. Although Jagiellonia pulled one goal back, the lead by Wisła was never threatened. The only team staying close to Wisła, Ruch Chorzów, celebrated a 2-0 home win against Polonia Warsaw. One goal was scored by ex-Wisła striker Andrzej Niedzielan. Wisła city rivals Cracovia scored points for the third consecutive time by drawing against Korona Kielce. The second Cracovian side has now risen to eleventh place.
The entire domestic leagues will take a short break to make way for a week of international football with the national teams. Poland meets with Northern Ireland in the Śląski stadium (Chorzów) on 5 September and then travel to Slovenia on 9 September, playing two crucial and probably decisive matches. The Polish Ekstraklasa restarts the weekend after, on 13 September.