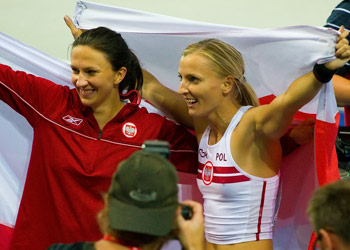 The IAAF 12th world athletics championships in Berlin have proven to be highly successful for Poland. The event, which was highlighted by two phenomenal world records in the 100 and 200 metre sprint by Jamaican Usain Bolt, saw Poland finish fifth in the medal ranking, ahead of respected countries in athletics such as hosts Germany, Great Britain and Ethiopia. The pinnacle for Poland was the double scored at the pole vault high jump by Anna Rogowska and Monika Pyrek (both from Gdynia).

Jelena Isinbayeva was the guaranteed winner prior to the contest. The Russian pole vault jumper is the female counterpart to Sergej Bubka, who dominated the sport from the late eighties to the turn of the millennium. But her arrogance came to a fall and so did the bar at 4m75. With not a single successful jump, it was Anna Rogowska taking the gold home as the only one who did survive that height. Monika Pyrek jumped 4m70, which was good for a shared second spot worth silver. The sport was baptised as the “Pole” vault, which was done rightfully so, if you took a look at the podium. Rogowska was stunned: “I expected Isinbayeva to win. I’m amazed and I do not yet realise that I’m world champion. I’m so proud for myself and my country! Also congratulations to Monika Pyrek.”

Hammering it out
Alongside to the pole vault jump, Poland hammered it all out, all the way at the hammer throw. Anita Wlodarczyk became world champion in a new world record throw, which was 77m96. Only days before, she had set a new Polish record during an event in Cottbus (Germany). Apart from a traditional and ceremonial victory throw pro forma, it would be Wlodarczyk’s only throw in Berlin as she injured herself while celebrating the new world record. Despite the injury, she proclaimed the she won a world championship gold medal with a new world record, the “happiest day of her life”.

Maybe not the longest throw, but most certainly the most impressive comeback at the athletics event also belonged to a Polish athlete at the hammer throw. Szymon Ziolkowski, the 2000 Olympic champion and 2001 world champion, suddenly reappeared out of nowhere after not having scored a single remarkable result in three years, clinching a silver medal and adding yet another honour to his already impressive list. “It’s good to have the confirmation that I can still get along with the world’s elite,” Ziolkowski said.

Surprises
The other four medals scored by Poland could be classified as surprises. First, a silver medal for Tomasz Majewski at the shot put. The medal itself wasn’t surprising, but the 2008 Olympic champion expected gold and not silver: “I’m disappointed. I should have won. I was in a good shape, but my throws did not reflect that.”

At the time of Majewski’s throw, Kamila Chudzik was competing in the women’s Hepathlon, which she finished third, earning a bronze medal. She aced the performance mainly because of an excellent long jump (1st) and solid performances in the 100 metre hurdles and shot put (both 3rd).