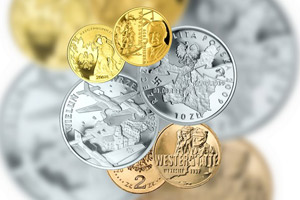 The Polish National Bank will issue a special set of coins, to commemorate the 70th anniversary of the start of World War II.

A 2 zl coin will honour those who died fighting the Nazis in Westerplatte, near Gdansk. The battle, which started early in the morning on September 1, lasted for seven days, despite only 182 Polish soldiers being present when the Nazis started their bombardment of the station.

A 10 zl coin, will remember those who perished in the bombing of Wielun, a town located in the southwest of the country. One of the many targets of this bombing was the local hospital, despite the large Red Cross painted on the roof of the building. This attack killed at least 1,200 civilians and destroyed 75 percent of the town.

Finally, a 200 zl coin, remembers Stefan Starzynski, President of Warsaw during that period, who stayed and fought the Nazis as they advanced on the capital. He also organized the movement that later became the Home Army. Eventually, he was captured by the Gestapo and most probably died in the concentration camp known as Dachau in 1943.

The Polish National Bank will start issuing the coins on August 28.

Photo of coins courtesy of the Polish National Bank