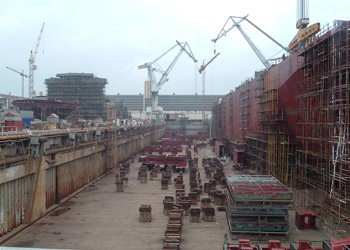 As reported last month, two of Poland’s troubled shipyards, in Szczecin and in Gdynia, were to be sold to QInvest, Qatar’s largest investment bank. However, the deadline for the firm to make a payment passed this week, with no money in sight.

The payment of 300 million złoty was due 17 August, a deadline that had been extended. On Tuesday, the country’s Treasury Ministry announced that Qatar is considering buying the shipyards in the place of QInvest. Treasury Minister Aleksander Grad stated: “I have made a decision to allow the Qatar Investment Authority the time to come up with a solution and take part instead of the previous investor.”

If a deal is not completed by the end of August, the deadline set by the European Commission, Prime Minister Tusk is to fire Treasury Minister Grad. After the European Commission ruled that EU aid to the two shipyards was illegal, the Polish government had the choice of either selling the yards or paying back billions of euros in aid.