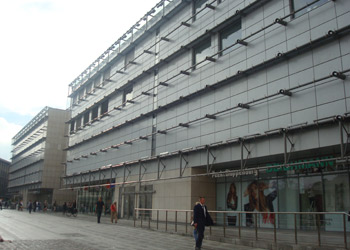 It is hard not to notice the recent change in appearance of Galeria Krakowska‘s facade. All that is left behind the glass panels that once decorated the wall are the metal frames that used to hold it in place.

The first two panels fell last November on a Sunday, one of the busiest shopping days of the week. Luckily, no one was hurt. The cause of the accident was unknown at the time, so for safety reasons, the entire facade area was fenced off. Why did they fall? The country building inspector, Małgorzata Boryczko, stated that PINB (Powiatowy Inspektorat Nadzoru Budowlanego, or the County Building Supervision Inspectorate) requested an analysis of the building’s technical status from ECE Projektmanagement, the building’s owner, when the incident occured. Upon completion, such analysis “revealed faults” but inspectors did not give specific reasons for the malfunction.

According to the director of Galeria Krakowska, Monika Pyszkowska, a decision was made to take down the glass panels with the intention of putting them back up as soon as the malfunction was resolved. Workers began to dismantle the glass panels after the analysis was completed but due to constant pedestrian traffic, work was slow and nerve-wracking. The removal was finally complete in the first week of August. Now, the only thing to do is wait until PINB gives the approval for the re-installation of the panels or some other material. Hopefully, the decision will be made quickly because the building, which once used to be literally glowing from lights, is currently an eye sore.