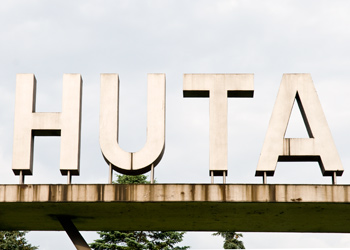 Over a year ago, the Krakow Post informed about plans for a museum of communism to be built in Krakow – in Nowa Huta, Krakow’s socialist utopian sister.

The site initially planned to host the museum was Kino Światowid, a former cinema which once hosted a mishmash of shops and is now owned by the city. However, today the Gazeta Wyborcza daily reports that the financial crisis has affected the launch of the museum’s construction, and a furniture shop has taken over this icon of Socialist Realism.

The city purchased the Kino Światowid building two years ago, with plans to open the first ever museum of communism in Poland there, as a part of the Warsaw-based Museum of the History of Poland. While the building needed extensive remodelling and renovation, city officials were hopeful that the museum would be operational by the beginning of 2010. Now, it’s likely that that date will be pushed back by at least a year.

Meanwhile, the former cinema building was to be used as a space for cultural events, including performances by the Nowa Huta-based Łaznia Nowa theatre group, as well as exhibitions marking July’s 20th anniversary of the first partially-free elections in Poland. None of that came to pass, however, as city officials asked the theatre to move out by May.

Now, adverts have begun popping up in Nowa Huta announcing the opening of a new furniture store in Kino Światowid, confusing those who have been working on the new museum’s plans as well as locals. According to Gazeta, the city had failed to dissolve a contract between the shop owner and the building authorities. Jadwiga Emilewicz, Nowa Huta branch manager of the Museum of the History of Poland, assured that come fall there will once again be cultural events in the former cinema.

Krakow Major Jacek Majchrowski signed a letter of intention with the Museum of the History of Poland in April 2008, stating his aim to found a museum of communism in Krakow. The plans for the museum include memorabilia from 1945-1989, as well as information concerning communist leaders in Poland and a large section devoted to the Solidarity trade union and its role in bringing down communism in Poland and starting the domino effect in the Eastern Bloc.