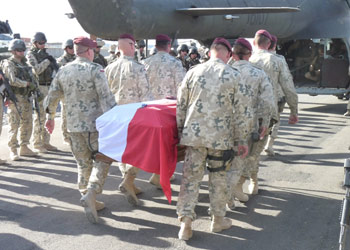 The week started off with tragedy. Tuesday brought news that another Polish soldier was killed in Afghanistan, a 32-year-old captain whose patrol had been ambushed and overwhelmed by a larger Taliban force.

As news spread of the death of the 10th Polish soldier to die since Poland entered the latest war in Afghanistan in 2002, politicians began to speculate whether our men are as protected as they can be in battle.

On Tuesday, Defence Minister Bogdan Klich stated that the ministry is debating whether or not to send an additional 200 Polish troops to Afghanistan. This strategic reserve is ready for deployment.

Defence Minister Klich also announced that the country is considering purchasing pilotless aircraft, or drones, from Israel. He had recently travelled to Israel himself, where he spoke with three different arms manufactures. “We’re going to buy a whole range of drones, from short- to medium-range,” Klich stated in the press conference.

The use of drones has been made controversial thanks to the United States’ deployment of drones into Pakistan, which has resulted in civilian deaths. The drones are armed with missiles and controlled remotely from a base.

However, on Thursday Prime Minister Donald Tusk responded to the Defence Ministry’s comments at a press conference, saying that more and better equipment, not more soldiers, is what is needed to help the Polish troops in Afghanistan. “There is every indication that we need to deploy more hardware there, not more men,” Tusk declared.

“Incidents like the latest one in Afghanistan make one wonder why the relatively big financial outlays on the Polish army are not spent in a way improving the safety and security of Polish soldiers,” he added, also saying that without the proper equipment, sending more troops would only endanger further lives and not improve security.

There are already 2,000 soldiers in the Ghazni province, which Poland is in charge of.