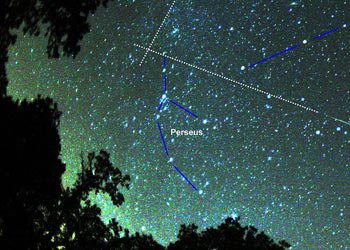 Those in the northern hemisphere of Earth will get quite a show tonight, as our planet passes through the Swift-Tuttle comet’s debris, resulting in the Perseid meteor shower.

The peak of the meteor shower, during which typically 60 or more meteors per hour can be observed with the naked eye, will take place tonight at 7:30 pm local time. Unfortunately, the sun will still be up here at that time, but the shower should be visible throughout the night of 12 August and the morning of 13 August. While the event occurs every August, astronomers are predicting that this year will bring a particularly stunning show.

As the Earth’s orbit takes it through the comet’s path, the bits of rock and dust will fly through our planet’s atmosphere, causing the illusion of hundreds of shooting stars streaking through the sky as the dust and rocks burn up. The Perseid meteor shower got its name from the fact that the shooting stars appear to come from the Perseus constellation.

So where can you catch the space show in Krakow? Unfortunately, today’s raincloud-filled sky and the normal city lights mean conditions are less than ideal for stargazing. However, heading just a few kilometres out of the city will make a huge difference in visibility. Another option is to find some higher ground – such as the Kosciuszki or Krak mound. Happy gazing!