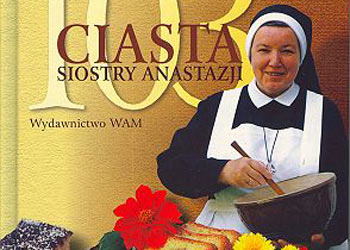 Sister Anastazja Pustelnik, a 59-year-old nun, has become one of Poland’s best selling authors thanks to her cookbooks. She has been cooking for the Jesuits for years, and they got the idea to put some of her recipes together in a brochure, which later became her first book, 103 Cakes of Sister Anastazja. Published in 2001, it is her most popular book, with around 400,000 copies sold to date.

Her later books include recipes for some polish classics and a selection of international dishes, which she learned to cook when some of the Jesuit priests returned from their studies abroad with new requests. Her latest book, which was published last year, puts together 123 salad recipes.

Her talent to create easy recipes has resulted in five cookbooks that have sold at least 1.1 million copies in her country, and negotiations are underway to translate and publish her books in countries like Slovakia and the Czech Republic.

Despite her success as a writer, she says that all of her efforts are in service to God. After morning prayers, she goes to the Jesuit Centre in Krakow and cooks lunch for 20 priests. She claims God gives her the recipes. Profits from the books go to good causes, including, of course, Jesuit programs.

Sister Anastazja’s success reflects how the Roman Catholic Church still plays a very important role in the life of millions of Poles and in Polish society itself – right down to the food.