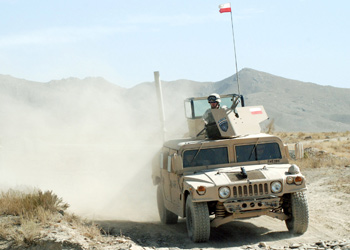 At 2 am this morning, the fears of a Polish officer’s family were confirmed. Captain Daniel Ambroziński’s body was found, the victim of an attack on Polish forces by the Taliban.

A patrol of 60 Polish and Afghan soldiers was ambushed by a group of Taliban numbering over 100, making this the largest attack against Polish troops yet. In addition to greater numbers, the Taliban fighters had the advantage of the element of surprise.

Captain Ambroziński died of wounds suffered during the battle, in which four soldiers were also wounded. His body was found after an intensive search in the region. Today, a ceremony will take place this afternoon at the base in Ghazni Province where the soldier was stationed.

The captain had served as a specialist in an advisory and liaison team, in the 1st battalion of the Air Cavalry. The 32-year-old soldier leaves behind a wife and daughter. He is the 10th Polish soldier to fall in Afghanistan.

Experts believe this attack, which is typical of a recent increase in attacks in the past weeks, is meant to cause turmoil in the country before the upcoming elections.