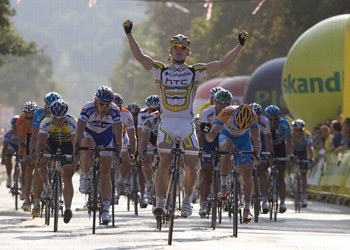 Football
In Germany the BundesLiga kicked off and top favourites FC Bayern immediately dropped points against Hoffenheim (1-1) in the race for the German title. Defending champion Wolfsburg started with a victory, as did Borussia Dortmund with Polish international Jakub Błaszczykowski. In Berlin, Hertha met with Hanover 96 and three Polish players were on the pitch. Hertha won 1-0, but striker Artur Wichniarek did not score and was replaced after 77 minutes, receiving a large whistle concert provided by his own crowd. Visitors Hanover had Jacek Krzynówek, who only played the first half, and Łukasz Piszczek, that lasted only 54 minutes on the pitch.

Cycling
World Champion Alessandro Ballan (Italy, Lampre) has won the Tour de Pologne, the annual cycling tour of Poland. In earlier years Ballan finished third and fifth, but now finally managed to win. The world champion won the fifth stage to Krynica Zdrój, which was to be the decisive win in this 66th Tour de Pologne that finished with four laps around the Błonia field in Kraków. The Italian, racing for Lampre, also managed finally to rid himself of the “curse of the rainbow jersey”, the superstition of every cycler that promises bad luck for the one wearing the world champion jersey. Second in the overall race was Daniel Fernandez (Spain, Team Caisse d’ Epargne), third was Edvald B. Hagen (Norway, Team Columbia), fourth Pieter Weening (Netherlands, Team Rabobank) and tied in fifth were two Poles: Marek Rutkiewicz (Team Polska – BGZ) and Sylwester Szmyd (Team Liquigas).

Athletics
In the final athletics meeting before the world championships in Berlin take place, Anita Włodarczyk – defending world champion – improved the Polish record in hammer throwing, by almost 40 centimetres, to 77m20cm. She did so in Cottbus (Germany), showing that she is in good shape. The new Polish record is still 60 centimetres short of the world record. The record might have been a birthday present, as Włodarczyk celebrated her 24th that day.

Formula 1
Peter Sauber has thrown himself into the fight for the remains of BMW-Sauber. The old team owner, who sold 80 percent of his shares to BMW, has announced a financial package that would make it able for him to buy back the team that carries his name. At the same time, International Autosport Federation President Max Mosley announced that if Sauber does not manages to come with a solid plan before Wednesday, a draft will be held amongst other candidates, such as Superfund Racing (Austria), Epsilon Euskadi (Spain) and Prodrive (Great Britain), to fill the spot left open currently by BMW-Sauber. It has also been announced that YouTube will become the main sponsor of USF1, the first fully American Formula One team, that will make its debut in 2010.

Tennis
Agnieszka Radwańska again failed to survive another quarter final this year. For the eighth time, Poland’s best tennis player did not survive the final eight. This time, Sorona Cristea appeared too strong for the world’s number twelve, by winning 7-6 (7:4), 1-6, 7-5, in the Los Angeles quarter finals. The same happened this year in Sydney, Indian Wells, Stuttgart, Rome and Eastbourne, alongside the grand slam tournaments of Paris – Roland Garros, and London – Wimbledon.