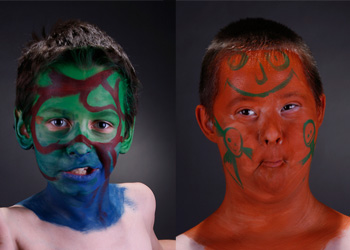 On 3 July, Marcin Kaproń, Tomasz Pucher and Jerzy Bestyński launched their exhibition of pictures of mentally disabled children. What makes the exhibition unique is that the children have their faces painted. This suddenly makes it possible for them to open up in new ways, more so than they are able to do in normal life. The pictures can be seen in Klub Rotunda until September 15th, when the exposition will be closed with a special concert. After that the exhibition goes on tour to Szczeciń, Wrocław and Poznań, before returning once more to Rotunda in Krakow, later this year.

Kaper
The project was a brainchild of Marcin “Kaper” Kaproń, who is a teacher and caretaker of mentally disabled children. Iwona Pasznicka, director of the school where Kaproń is active (Szkoła Jana Brzechwy Specjalna Szkoła Podstawowa nr 44 w Zespole Szkół Specjalnych nr 4, on Sanatorska Street 9) honestly admits she was quite sceptical about the project: “Marcin really had to persuade me. But he convinced me with his determination and his enthusiasm.”

Pasznicka continues to praise Kaproń: “He’s a very unconventional teacher. He is a really creative and passionate spirit, and does a lot of music and theatre with the kids. Those youngsters love him. Parents even ask if Kaper can go along with the children to their next classes. The fact that he is able to build such a close relationship with the children, I consider that his greatest achievement.”

Kaproń himself played with the idea for almost two years, until he found a dedicated partner in Tomasz Pucher, who is a colleague of Kaproń and who does body art as a hobby. At the end of 2008, the two approached the school’s director Iwona Pasznicka, who gave her consent, after which the actual photo shoot commenced in early 2009.

Bestia
Photographer Jerzy “Bestia” Bestyński, who usually commits himself to still life sessions and other artistic endevours, admits the first shoot was problematic: “That was a test shoot. It was my first time with these children. Some of them have Down syndrome, some of them have ADHD, or are autistic and some of them are not even able to communicate in conventional ways (i.e. lack of speech). It took a lot of patience, something that I rarely have. But things got a lot better the second time around.”

First, the pictures were painted on paper, after which, one by one, the kids would get their faces painted according to those initial pictures. One after another, they took a seat in front of Bestyński. Remarkably, the children transformed into a living story. “Suddenly you realize that there is more than meets the eye with these children,” Kaproń says. “These kids also have a story to tell and the pictures by Bestia have brought these stories to life. These aren’t disabled people anymore, these are people, each with a story just like you and I.”

Lili and Max
The exposition shows 16 children, each with their own story. Every picture has a nickname. Kaproń especially hails the picture known as “Lili”: “This child isn’t able to speak. But after four months of silence he did start to make sounds, and one of them was ‘Lili’, hence the title.” Bestyński recalls the child reaching out to him right at the moment the picture was taken. “The result is that he’s looking into the camera, as if saying ‘Listen to me, I have a story to tell you.’”

Another great session resulted in “Max”. “All of the pictures with this child, who has Down syndrome, were great,” Bestyński remembers. “It was hard to find the right picture, because all of them were so good!” Towards the end, even Bestyński was able to connect with the kids. “The children asked when Mister Bestia was dropping by again. They had so much fun,” Kaproń said. “The results were breathtaking, especially for the parents. They were very happy; some of them even crying out of joy, to see their children opening up so dramatically.”

On stage and on tour
The exhibition will be followed by a special concert on 15 September. Blue Machine, a well-respected band in Krakow, will participate. Also, ideas for a special ballet and theatre play (another idea by Kaproń) might materialise especially for this occasion. Klub Rotunda has made its stage available for this special purpose.

After this, the exposition will go on tour and travel to Szczeciń (Galeria Pod Sukniami), Wrocław and Poznań (both on the main square) to raise awareness for the cause. Iwona Pasznicka states that this is the most important result of the photo shoot and the exposition: “Polish people still have to open up to these disabled children. They are still being stigmatised and have hardly any future in Polish society. These initiatives should take some of the prejudice away. Some countries in Western Europe allow these people to live on their own with some guidance of caretakers, some of them even joining society as normal working persons, doing simple work. That is where Poland needs to be as well.”

Centrum Kultury Rotunda can be found on Oleandry Street 1, directly next to the Błonia field, close to the KS Wisła Kraków stadium on the Reymonta Alley.

Other work by Jerzy Bestyński can be seen on his website: www.jerzybestynski.com.