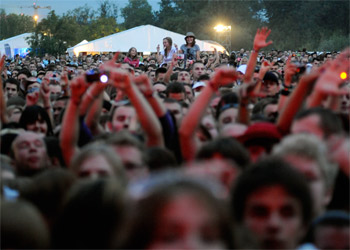 As the weekend unfurls, several great festivals will be taking place, followed by a few more treats later in August. Below, we’ve prepared our annual Festival Guide to the best festivals in and near Krakow for summer 2009.

This cult music festival began only three years ago, as alternative music finally floated to the surface of Polish culture. Artur Rojek, leader of legendary Polish band Myslovitz, is the artistic director, and every year he import some real gems in independent music. There’s plenty of Polish talent on show as well, not to mention the annual competition for young Polish bands. The festival’s main events take place on the 7th and 8th at the Słupna Park, but on the 6th and 9th you can catch special performances at more intimate venues such as the Evangelical Church. A two-day pass is 95-105 złoty for the main festival. Concerts on the 6th and 9th are 35 złoty each.

Audioriver is one of the few festivals in Poland recognized internationally as a music destination, with music website Resident Advisor ranking the fest an impressive 4th in their top 10 international festivals for August. With its comparatively low ticket price, Audioriver will likely draw not only Polish electronic music fans, but party-goers from abroad as well. The main events take place on Friday and Saturday nights along the banks of the Vistula, and on Saturday and Sunday you can walk into the town for more cultural events. A full pass is 100 złoty.

Mainstream doesn’t have to mean boring, but unfortunately it does mean you’ll have to reach a bit deeper into your pockets for a ticket. However, for a 200-220 złoty pass you can see some of the world’s top rock, pop, and hip-hop acts – and all within taxi distance of your home. Not bad! There will be three stages of music, plus a “crazy” Coke Clinic tent where you can take a break from the noise and get a massage. Check the festival’s website for more information as it’s announced at livefestival.pl

The Nowa Muzyka (New Music) festival has been making waves in the last few years, but this year they have outdone themselves, exploding onto the festival scene with one of the most eclectic line-ups in Poland. The weekend is packed with musicians that are nearly impossible to pin down, crossing musical borders and embracing multiple genres. The music is not the only unique thing about Tauron Nowa Muzyka – the festival will take place in the industrial grounds of the Katowice Coal Mine. Sure to be one of Poland’s most talked about cultural events of the year. Full pass 125 złoty.