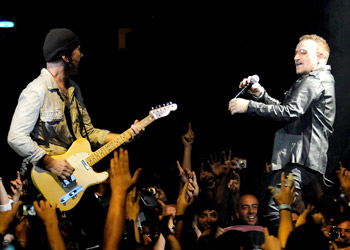 It’s no secret that Poles are fans of the legendary Irish rock band U2. There are scores of Polish-language websites and forums dedicated to the band, and there’s a good chance that it was these dedicated followers that filled Chorzów’s Silesian Stadium last night.

In total, 70,000 fans came to see U2 play for the second time in Poland. One überfan even showed up the night before, sleeping bag in hand, to line up at the gates – and as the night progressed, he was joined by hundreds of people.

The concert featured a 360 degree stage, the largest ever constructed for a pop concert. The stage was then surrounded by fans on all sides – an idea Bono told Rolling Stone is “an engineering feat that creates this real physical proximity to the crowd.”

The concert was part of U2’s tour promoting their latest album, No Line On The Horizon.