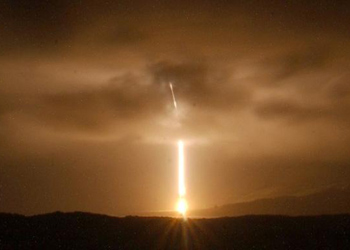 U. S. President Barack Obama visited the Kremlin for the first time ever on the weekend of 12 July 2009, in an effort to continue the “re-setting” of American-Russian relations. One topic discussed was the U.S. missile defence system in Central Europe. Neither Russia, which is adamantly against the missile shield, nor the United States, which continues keeping the program as an option, budged significantly on the issue. After talking to several experts in the field and conducting extensive research, I have finally come to the conclusion that the missile shield is not only a good idea, but also an absolute necessity for Poland and for the United States.

The missile shield in Central Europe would be comprised of 10 ground-based, long-range interceptors in Poland and mid-course radar components in the Czech Republic. Its purpose is to protect American allies and assets in Europe from potential nuclear threats arising from rogue nations such as Iran or North Korea, which are thought to be developing nuclear missiles.

Perhaps you may be wondering why a country like the United States, which is already protected against nuclear attacks on its territory, needs a missile shield in Poland. Or perhaps the question that is running through your mind is why Poland would increase its own risk of being a target for a terrorist attack by hosting a U.S. shield on its territory. Both of these questions are valid and understandable, but after an in-depth analysis of these issues in this article, it will be apparent that the missile shield is necessary for both countries.

The first thing most people think of when they think of Poland is its history. More specifically, people envision the history of the Holocaust and the devastation caused by World War II, followed by the communist years under the Soviet Union. After speaking to several Polish people and having lived in Poland for quite some time, it is apparent to me that this traumatic history is very much present and relevant in modern Poland as well. After all, Poland only gained independence from the Soviet Union 20 years ago. Polish people remember all too well what happens when hegemony emerges in Europe. Poles, in general, are wary of a Franco-German hegemony emerging within the European Union (EU) and are much more comfortable when a democratic, stable hegemony is a far-away country, such as the United States.
Polish people also remember well that written agreements from other countries are not a security guarantee when there are major political players trading countries to establish spheres of influence. Poland was a major loser in the Yalta conference, in which it was essentially traded to the Union of Soviet Socialist Republics (USSR) by the United States and UK, despite such security pledges and promises. Consequently, Poland prefers to have specific structures and tangible objects that act as security guarantees, not just promises and written agreements.

Although Poland is a member of the North Atlantic Treaty Organization (NATO) and is protected by Article 5 (an attack against one NATO member is an attack against all), it still prefers to have more concrete ties to American military personnel and armaments. “Having 10 American interceptors in Poland would inextricably tie at least 200 American military personnel to the shield,” according to one U.S. consulate officer, who prefers to remain anonymous. Polish government officials feel that the United States would be more willing to come to Poland’s rescue – if a situation arose in which Russia exerted its influence in this former Warsaw Pact country – if Poland has components of the American Ballistic Missile Defence (BMD) program. In fact, Poland only accelerated negotiations concerning the U.S. missile shield when Russia attacked Georgia in August 2008 as it became clear that Russia is still compelled to wield and exert power in former Warsaw Pact states. By integrating Polish defence with American security directly, Poland has the ultimate guarantee that it will not come out as a loser after major countries have played the power-politics game.

Practically speaking, the shield is also beneficial for Poland’s economy because, by the most conservative predictions, the U.S. will invest $3.4 billion into the missile defence program, in addition to the $251 million it will spend annually to maintain it. Additionally, the shield will be integrated within NATO’s structure, which means that NATO will most likely place an Alliance Ground Surveillance (AGS) base in Poland. The AGS base will create at least 3,000 new NATO jobs in Poland and will be the first base of this type ever to be built in a Central or Eastern European country.

Iran is a very real and progressing threat. For instance in 2007, there were 120 ballistic missile tests outside of the United States, and Iran was the third most active country in this missile-testing program. Clearly, Iran is aggressively pursuing nuclear capabilities that are able to strike American assets and allies located on the European continent.

Secondly, as rogue nations such as Iran or North Korea become nuclear states, other countries in the Middle East and Asia may feel compelled to acquire nuclear weapons as well, thereby creating a domino effect. Therefore, the U.S. needs to ensure that Iran and other parties that could potentially have nuclear capabilities are unable to threaten and coerce the American government and American allies. A missile shield would essentially remove Iran’s motivation for manufacturing long-range nuclear weapons and curtail any future domino effect.

Additionally, over the last ten years, the U.S. has been declining in power, not relative to other countries in the world (because without a doubt, the U.S. still possesses the strongest military and economy), but relative to its own power only a decade ago. As EU countries, especially major Western European countries, see this relative decline in power, the need for a European security architecture as well as a coordinated army becomes increasingly important. Because the EU already has the European Security and Defence Policy (ESDP), it already has the framework to establish such a European army, but not necessarily within the framework of NATO. ESDP may become an alternative to NATO rather than a supplement. Western European countries may fail to recognize the continued importance and relevance of NATO, especially given some Western European countries’ amicability and close relationship to Russia. It is important to note that ESDP is currently stagnant because European states are unwilling to increase monetary contributions towards its policy. The idea that ESDP can become a stronger policy in the future will not happen in the short-term or even in the near long-term, but rather farther in the future.
Without the need for Western Europe to depend on the hard power of the U.S. within the NATO framework and with a new European army, the U.S. may find itself an outsider and unwelcome in the European security structure. That is where the missile shield comes in.

If the U.S. actually places this missile shield in Poland (specifically in Słupsk on the Baltic Coast), the U.S. ensures that it will be involved in European defence for years to come. The U.S would essentially integrate the American security architecture with that of the European security framework, which would ensure America’s voice in European security for several decades.
From a strictly geostrategic consideration, it is absolutely necessary that the U.S. remains involved in European defence projects, so that coordinated efforts against terrorism and future threats will be facilitated easily and quickly. Before rogue nations manufacture long-range missiles that are capable of hitting U.S. territory, they will most likely produce short and medium-range missiles that are capable of hitting Europe. It is essential that any actions taken against these real threats are coordinated with European allies and assets.

Future of the Shield

If the shield is so beneficial for both the United States and Poland, then why do doubts exist about whether the project will continue? From the very beginning of his campaign trail, President Barack Obama stated that he supported the idea of a missile shield in Central Europe if it was cost-effective and proven to work. During his campaign, Obama said, “I actually believe that we need missile defence because of Iran and North Korea and the potential for them to obtain or to launch nuclear weapons.” Because it is clear that the current U.S. administration perceives these same threats as the Bush administration, it is necessary to evaluate the cost and effectiveness of the missile shield.

What are the costs of this missile defence program? Between Ronald Reagan’s Star Wars speech in 1983 and 2008, the United States spent a total of $120 billion on missile defence. $56 billion of that was from between 2002 and 2008. According to the most conservative predictions, the U.S. is likely to spend another $50 billion from 2008 to 2013. Although this prediction seems like a hefty sum of money to pay during a global recession and economic crisis, the alternative to not building the shield could potentially cost much more. For instance, if rogue nations are in fact able to acquire and manufacture missiles that are capable of threatening and hitting our allies in Europe, the cost of containment may amount to billions. Additionally, if a rogue nation actually does launch a nuclear missile at a major city, there is no real price we can place on the loss of life and actions taken by the U.S after such an attack. For instance, the cost of the terrorist attacks on 9/11 according to some estimates cost the U.S. at least $95 billion, which excludes replacing infrastructure and the impact on financial markets.

Even if the shield is better than complacency, does the missile defence system even work? Since September 2005, the Missile Defence Agency has successfully conducted 25 out of 26 tests. However, it is important to note that these tests did not include decoy missiles. If a rogue nation attacks the U.S. or its allies, it would most definitely use decoys of some sort. In short, these successful tests occurred when the Defence Department knew the exact time, location, and trajectory of the missile launch. Additionally, the type of missile used in the interceptors in Poland will be standard SM-2. The missiles in our defences in California and Alaska are standard SM-3 and all the previous missile tests have also been with conducted on the SM-3. Therefore, President Obama could technically and accurately claim that the missiles to be used in the interceptors in Poland have never been tested and are not proven to work.

Regardless, the United States will need stronger missile defence in the near future and the Defence Department should continue researching and developing the components needed. Poland and the United States must continue pursuing mutually strategic foreign and defensive policy that will fortify the strong, democratic friendship between these two freedom-loving countries.

Anita Sundarajan is currently working on a Fulbright research project on the U.S. missile shield in Poland and its ramifications for the U.S.-Polish strategic partnership.