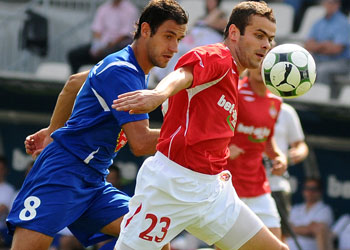 Last weekend, the Ekstraklasa Polish football league kicked off. Defending champion Wisła Krakow has had a disastrous start so far, with elimination from the Champions League by the tiny Levadia Tallinn from Estonia. Furthermore, the first confrontation against a domestic rival also ended in defeat. Lech Poznań won the Super Cup after winning 4-3 on penalties. The game itself ended goalless.

And so for Wisła Krakow, the last chance for a big prize is a successful prolonging of the league title. Wisła defeated Ruch Chorzów thanks to goals by captain Arkadiusz Głowacki and Wojciech Łobodźinski with 2-0. Cracovia, the other team from Krakow, lost away by the same amount of goals to Sląsk Wrocław. The lead was taken by Legia Warsaw, who defeated Zagłebie Lublin by 4-0. They confirmed their good shape for the upcoming return in the Europa League against Danish cup winner Brøndby. As did Lech Poznań, which defeated Piast Gliwice by 3-1. Lech had already virtually secured themselves an advance to the next round of the Europa League by beating Frederikstad in Norway by 6-1. The third Polish contender in the Europa League, Polonia Warsaw, the only ones to lose (against Dutch side NAC Breda 1-0), continued their weak form with a 4-0 defeat by visiting Korona Kielce.

Abroad, footballer Marcin Wasilewski has set two goals for this week. His first is to secure the next round in the Champions League with his current team Anderlecht. His second is to seal the deal with a transfer away from his current team, to move to either Hull City or Stoke City, both currently playing in the English Premier League.

Pole vault jumper Anna Rogowska, national champion and record holder with 4m85, has made it her goal at the upcoming world championships athletics in Berlin (Germany) to finish on the podium. Her current best jump this season and also her current form indicate that it is a very realistic target.

Instead of actual performances, it might be a goal to some to just stay active in a sport. Former Formula One champion Kimi Raikkonen is rumoured to leave to race in the world championship rally in which he made his debut this weekend in Finland. And while BMW already confirmed that it will be pulling out, Renault might leave as well, and Polish Formula One racer Robert Kubica is doing everything he can to stay in. Depending on the possibilities of Raikkonen leaving F1 and Fernando Alonso moving to Ferrari, Kubica is now likely to move to Renault or Williams, according to the Italian sport newspaper Gazetto dello Sport.

For some in cycling, the goal is Krakow. This weekend the Tour de Pologne started with a stage starting and finishing in Warsaw. Next weekend the race ends in Krakow, after the peloton has passed cities such as Białystok, Lublin, Rzeszów and Zakopane. The race has some high level contenders, such as Polish champion Marcin Sapa, world champion Alessandro Ballan, former Giro d’Italia winner Ivan Basso and Sylwester Szmyd, the first Pole to win a race on top of the legendary mountain Mont Ventoux, in this year’s Dauphiné Liberé. Szmyd is aiming for the overall win in this year’s Tour de Pologne. The first stage ended in a mass sprint in the streets of Warsaw and was won by Borut Bożić from Slovenia.

Not quite achieving his goal was Paweł Korzeniowski. The Polish swimmer went for gold, but during the world swimming championships in Rome (Italy) he had to settle for a silver medal on his favourite distance, the 200 metre butterfly. It proved to be the only Polish medal, although Alicja Tchórz and Robert Kawęcki did set new Polish records on both the women’s and men’s 100 metre backstroke.

Somebody with no more goals, or all goals achieved – whichever way you look at it – is Dorota Świeniewicz. The volleyball player of the golden generation that clinched the European Championship title in 2003 and 2005, said that she will no longer be available for the Polish national team. She stated that she felt privileged that she could play volleyball for over 25 years, but that she wants a change of life, without the pressure and tensions of professional volleyball. She was proud about the goals she achieved, especially playing and winning for her country. Or as her official statement ended, “It was worth it.”