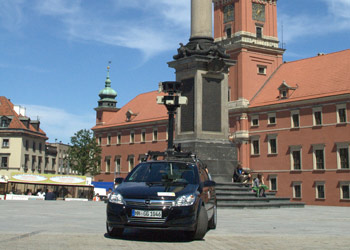 The Street View car, equipped with a photographic camera that takes pictures in 360 degrees, arrived today and will begin the process of photographing Krakow’s streets this week. Depending on the weather, the process can take from a few months to half a year.

In a press conference in the Krakow Google offices earlier today, Noam Ben-Haim, Google Maps Product Manager for Europe, Africa and the Near East, explained the service in a teleconference. Initially, the feature will appear in Warsaw and Krakow. There are plans for expanding to more Polish cities in the future, though they have not yet been decided upon. The criteria for choosing cities rests not only on their size, but also on their attractiveness; a case in point would be Street View’s presence in smaller, picturesque towns in Italy and France.

But what exactly is Street View? In essence, it’s a way of showing a city from the point of view of a pedestrian, in 360 degrees, or what Google staff call “the ultimate zoom in”. The service has potential benefits for both locals and tourists. For example, one can look at the surrounding areas when looking at potential flats without leaving the house, or can visualise a route before driving somewhere new. Meanwhile, tourists can check out hotels or attractions before planning their trip. Users can also add their own photographs of landmarks, which are then available to those looking at a city through Google Maps or Street View.

So far, the biggest criticism of Street View has come from an ongoing debate about privacy in the cities where it is already present. Though Google has implemented privacy measures, such as blurring out people’s faces and the license plate numbers of cars caught on camera, concerns have been raised about its “Big Brother” aspect. Marta Jóźwiak, Communications & Public Affairs Manager for Google Poland, attempted to calm these fears by explaining that Street View is not a live camera feed; there is a delay of four to six months between when the photos are taken and when they are available in Street View. However, should someone spot something inappropriate on Street View, they can report it to Google and the photo is usually taken down within 24 hours.

Google Maps has been available in Poland since 2008, and Street View cars began photographing Warsaw in May of this year. The process is still going in the capital, and no date has been set yet for the launch in either Warsaw or Krakow.

Since launching in mid-2007 in the U.S., Street View has moved into several European countries, beginning with a map of the Tour de France route. At the moment, it is available in France, Spain, the UK, Italy and the Netherlands.