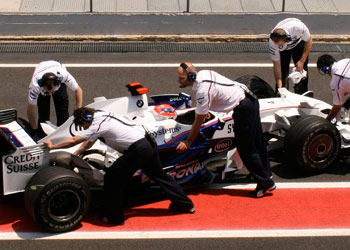 The future of Robert Kubica turned a little brighter today, when news came out that Nelson Piquet junior has been suspended by his team Renault and will race no more for the team, while Nelson Piquet senior is rumoured to have started negotiations with the BMW-Sauber F1 team about a possible takeover. BMW-Sauber is the current employer of Robert Kubica, but they’ve announced their departure from the Formula One sport at the end of this year. A possible takeover and a revived partnership between Piquet and BMW may save the career of Poland’s first and only F1 driver.

Piquet Junior
Piquet Jr., also known as Nelsinho, has failed to make an impression in Formula One so far. Debuting at the start of the 2008 season, Nelsinho has scored 19 points in his maiden season, including a second place in the German Grand Prix. This season however, he has scored no points at all. With no-point-finishes also counting in Formula One, Nelsinho was actually the season’s worst driver until Jorge Alguersuari made his debut in Hungary, replacing him at the bottom of the overall standings.

“I want to say thanks to the small group who supported me and with whom I worked together at Renault F1, although it is obviously with great disappointment that I receive such news. But, at the same time, I feel a sense of relief for the end of the worst period of my career, and the possibility that I can now move on and put my career back on the right track and try to recover my reputation of a fast, winning drive,” Nelsinho stated on his official website. He continued, saying “A manager is supposed to encourage you, support you, and provide you with opportunities. In my case it was the opposite. Flavio Briatore (the Renault F1 team manger) was my executioner.” The Brazilian thinks that getting the sack is unjustified: “In 2008 I scored 19 points, finished once on the podium in second place, with the best debut year ever of a Brazilian driver in F1.”

Piquet Senior
That last statement is incorrect to some extent. In absolute figures he is right, but nowadays we rank the drivers with different points for different positions. If we would translate every Brazilian result to modern day standards, Nelsinho’s performance is outdone by the late Formula One legend Ayrton Senna, who would’ve scored 22 points back in 1984.

However, he did outperform another legendary Brazilian racer: his father Nelson Piquet. And now it appears that dad might come to the rescue of his son. Alongside being a successful racing driver and a three-time Formula One world champion, Nelson Piquet Sr. is also a successful businessman and owner and manager of his own Formula Three and Grand Prix Two racing team (F3 and GP2 are the racing classes directly below F1). And Nelsinho has been racing in his dad’s cars since 2001, until he was signed as a test driver by Renault, back in 2007. In between, Nelsinho won the South American F3 title in 2002, the British F3 title in 2003 and finished runner-up in the GP2 series in 2006, while also winning the 1,000 Miles of Brazil, an endurance race in the Le Mans-series.

Kubica to benefit from a new Piquet-BMW alliance
But where junior has to step down, senior is about to step into F1 again. It is reported that Nelson Piquet Sr. has begun negotiations to buy BMW-Sauber, in the same way that Ross Brawn bought the Honda F1 team this year. Piquet and BMW do have a history together, when back in 1983 Piquet finished as world champion for a second time, driving a Brabham car powered by a BMW engine. Now, the official team name would become Piquet Sports and of course there will be a spot for his son, but also for Robert Kubica. Since Nelson Piquet is buying himself into the team he has to respect the existing contracts. And while Nick Heidfeld’s contract is expiring, Kubica’s agreement lasts until the end of 2010. Then again, who better to ask than Nelsinho Piquet what a contract is really worth in modern day Formula One. Nothing really. Who will replace Nelsinho Piquet at Renault for the remainder of the season is unknown so far.