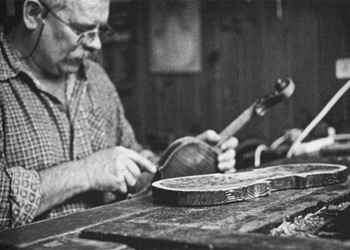 Recently, the number of books about Krakow has multiplied with all the speed of Harry Potter spin-offs, but there has been no guide quite like this before. The Last Mohicans reminds us that we haven’t all been reduced to the status of robots yet. Grégory Michenaud, a French photographer based in Krakow, has managed to track down the last champions of the city’s artisanal trades. His touching chronicle often feels like the last flickers of a vanishing world, but maybe there’ll be a renaissance after all.

Krakow was once a city where the craftsman was king, quite literally in one sense, as the so-called Fowler King emerged from the ranks of the wealthy artisan guilds. The real, blue-blooded king up at Wawel Castle even allowed the artisans to sport noblemen’s dress, much to the annoyance of the genuine nobs.

Today of course, only the faintest echo of these crafts survives, but Mr. Michenaud has sought them out. Stepping through crumbling courtyards and down hushed side-streets, he meets the embattled faces of yesteryear: a luthier, a saddler, a milliner, a corset maker, a piano tuner, a puppet-maker and more. Rendered in black and white, the characters often appear as ghostly apparitions from another age, and it’s a mark of the photographer’s skill that he has managed to achieve a stirring sense of intimacy with his subjects.

The book is tri-lingual (Polish, French and English), fleshed out with warm-hearted texts from Krzysztof Michalski. Words of approval are added by noted wit and historian Leszek Mazan and photographer Stanisław Markowski. There are many charming characters, such as the umbrella repair lady who rejoices in rain, and who longs for a glimpse of the old age of elegance, when ladies sported really exceptional umbrellas, not like in the dreary communist years. All in all this is a beguiling book that strikes a comforting chord. Somehow, these figures have managed to cling on here in Krakow. So if you need an umbrella fixing, or a snazzy hat made for a wedding, this book can be your bible.

The Last Mohicans: A Guide to Uncommon Places, can be purchased at the Bona Bookshop at ul. Kanonicza 11, or Lokator, ul. Krakowska 27