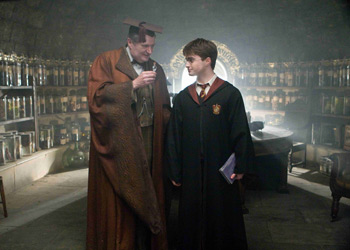 The Polish premiere of the highly anticipated sixth film of the Harry Potter saga took place 20 July at the Kijów cinema in Krakow. Arriving on the red carpet to the delight of local children were two of the film’s young stars: Bonnie Wright, who plays the role of Ginny Weasley, the red-headed little sister of Ron, and Matthew Lewis, whose Neville Longbottom has been a faithful friend of the three main characters throughout the series.

Now, as someone who took the trouble of going to the premiere, it’s expected that I, along with probably everyone else there that Monday evening, had read all of the books and knew the plot by heart. Luckily for those not as devoted (or with less free time), a rudimentary knowledge of the Hogwarts mythology is all that is required to follow the story.

Compared to the previous five tomes of the tale, the sixth enters much darker territory, as Harry and his friends, now 16, have to face not only the return of the evil Lord Voldemort and his Death Eater minions, but something far more frightening: adolescence. Awkward teenage moments provide most of the comedic relief in the film, while the characters struggle to balance budding love lives with increasingly demanding studies and daily social drama. In fact, missing from the film entirely is the series’ larger than life villain, Voldemort, as the story focuses on much more familiar struggles between right and wrong within the young main characters.

While the psychological struggles might not yet resonate with younger viewers, undoubtedly the high-flying action of the excellently choreographed Quidditch matches and the magic of, well, magic in the film will delight both young and old.

Harry Potter and the Half-Blood Prince is playing at Kijów Cinema.