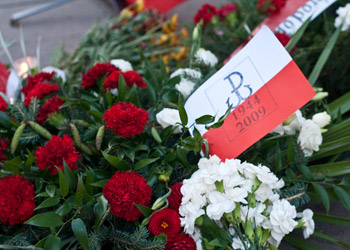 Poland’s capital remembered the 65th anniversary of the heroic Warsaw Uprising, which was launched on 1 August 1944 at exactly 5 pm.

Thousands of Poles, along with World War II veterans from across Europe, paid their respects to those who died in the uprising against the Nazi German occupiers. At precisely 5 pm, the exact time the Warsaw Uprising began, sirens wailed and the city remained silent for a minute, paying tribute to those soldiers who lost their lives during the doomed uprising.

It is important to mention that out of the 32,000 Polish fighters that survived the rebellion, only around 3,500 are still alive, most of who were in their early 20s or even teens at the time.

President Lech Kaczyński and Prime Minister Donald Tusk were also present during the commemoration this past Saturday at the tomb of the Unknown Soldier, but there were no speeches from these two politicians.

To commemorate the event, the city was decorated with Polish national flags and a military band played the National Anthem during the ceremony.

People also gathered at the Powązki military cemetery, to honour to those who had fallen in combat.

Against all odds, troops of the Polish Home Army, using predominately homemade weapons, fought against the Nazis, but their rebellion was crushed on 2 October. Around 18,000 polish soldiers died, and at least 17,000 Nazi troops as well. 200,000 civilians were killed and 500,000 more deported, as the Nazis took Warsaw back after 63 days. After those two months of battle, the city was in ruins.

The Red Army had stopped at the eastern border of Warsaw, but did not intervene at all in this conflict, letting the uprising run its course. A few months later, in January of 1945, they resumed their way to Warsaw and seized control of the city.

More information can be found at the Warsaw Rising Museum.