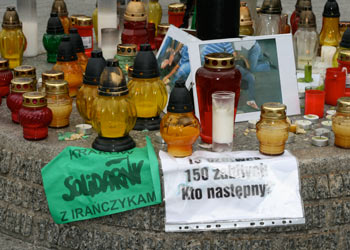 It has been over 30 years since the Islamic Revolution of Ruhollah Musavi Khomeini swept the pro-Western government of Shah Mohammad Reza Pahlavi out and established the theocratic Islamic Republic of Iran. This year marked the 30th anniversary of the revolution (although it began in 1978) and officials in Tehran celebrated it using a tried and tested propaganda campaign.

It must have been an unpleasant surprise for them to observe what was happening just a few months later in June 2009.

After the 12 June presidential election, President Ahmadinejad’s main rival Mirhossein Mousavi contested the victory of his counterpart and the outcome of the election. As a result, supporters of Mousavi clashed with Iranian police on the streets of Tehran, while protesting against Ahmadinejad’s alleged victory. Quickly, Iran found itself on the front pages of newspapers worldwide in what seemed to resemble the beginning of a backlash against the regime.

In Poland, a country that is hardly the biggest player in the Middle East strategic game (to say the least), the events in Iran made a surprisingly large impact, especially given the ever-growing disinterest of the Polish media in foreign news coverage. On this occasion, both the government and public opinion were quite vocal about the protest in Iran. Poles felt generally sympathetic towards Mousavi supporters, citing Poland’s own experiences with the communist regime and its abusive powers. Andrew Nagorski from Newsweek went even as far as to compare the Iranian protesters to members of the Polish Solidarity movement from the 1980s.

The Polish government reacted within the European Union policy lines, which, as Polish Radio reported, understands “that while it is the Iranian nation which elects its leaders, Europe should act together in the defence of the human and civil rights of the Iranian nation”. In addition, Poland joined the other EU members and summoned the Iranian ambassador to Poland in a protest against the detentions of personnel at the British Embassy in Tehran.

Locally, reactions to the aftermath of the Iranian election were also visible. On the Market Square people lit candles and hung green banners and posters in a gesture of solidarity with the protesters in Iran. According to Gazeta Wyborcza, around 200 Cracovians gathered at the square to support opposition against the ruling regime in Tehran. Significantly, in virtual reality – take Nasza-Klasa, Goldenline, Blip.pl (Polish Twitter) or Facebook, for example – there were a number of sympathizers of the oppressed Iranians as well.

One of the most striking facts about contemporary Iran is its extremely young population. It is estimated that out of its population of 66 million, two thirds is less than 30 years old. This might be bad news for the current regime, as those people may sooner or later want to share some of the freedoms their peers enjoy in the Western world.

This is not to say that transformation is inevitable and imminent or pro-Western in nature. But it is much more likely to happen within the next five or ten years. We should also bear in mind that according to the CIA World Factbook, over 21 percent of Iranians are not older than 14 years old, which means that the youngest of the young generation are yet to make their mark on Iranian politics.

On the other hand, it is critical not to be carried away with the giddy mood – encouraged by media hype – that Iran’s regime is on its knees and the counter-revolution on its way.

First of all, such an outcome would be a serious overstatement. Let us remember that Iran is not a country where a clique of government and military officials oppresses the rest. Whilst the character of the regime is surely a tyrannical and bloody one, there are still many Iranians that support their country in its current form, regardless of what people around the world think (so much for the black and white opposition between regime versus society).

Secondly, the opposition against president Mahmoud Ahmadinejad is still weak and relatively small – although it has been very visible in the international mass media during the protests, because of Internet tools such as Twitter, YouTube and Facebook. Moreover, the regime in Tehran was evidently afraid of another “colour” revolution (green in this case) and it has already implemented some harsh repressions and censorship since the June protests. As Roger Cohen put it in the last issue of the New York Review of Books, “the Moussavi wave came very late, and it was coloured green, setting off alarm about colour-revolution at the headquarters of the Revolutionary Guards (…)”. This will possibly result in suppressing what is left of the opposition for the near future.

Last but not least, even if assuming for the sake of the argument, that an alternative to the current regime emerges in Iran, one should be very cautious about the final outcome. Because even the most staunch democracy supporters in the West would not like to see a violent and bloody conflict over the rule of Iran.

Too early for the Chinese model?

The above-mentioned doubts do not answer the vital question of what to do with Iran. Should democratic governments talk to a regime that suppresses peaceful demonstrations and kills protesters? This is a tricky and by no means rhetorical question – particularly for the Obama Administration and its policy of engaging Iran. From this perspective, the June election delivered a serious blow to American diplomacy plans. It came just at the moment when the Obama Administration began the process of “talking” to Iran. Now, policymakers in Washington might need to take a step back and see just how the situation develops.

For Mr. Ahmadinejad, who took the presidency in the end, it also constitutes a Pyrrhic victory. Before the election Iran was perceived as the dominant power in the Persian Gulf. The Unites States, which had contributed to Iran’s driver seat position by its dubious policy in Iraq, was ready for rapprochement with Tehran. Now, the regime in Iran is not only weakened on the inside but has also lost a lot abroad, as even those who were advocating a softer approach towards Iran are getting wary (and rightfully so).

This does not sound like good news for those who were looking forward to a new chapter in Iranian relations with the West.