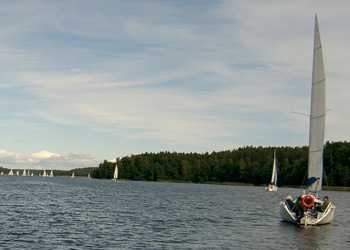 The second half of July brought excellent news for the Great Masurian Lakes, with Swiss foundation New7Wonders’ announcement that the region has qualified for the finals of a global poll to choose a new list of seven natural wonders. The Polish region, known as a paradise for ramblers and those who delight in discovering unique spots, blessed with vast forests, undulating moraine hills and a large number of lakes and rivers, defeated 412 candidates from around the globe.

The human tendency to rank the most splendid places, catalogueing their beauty and creating a compass for travellers eager for exceptional impressions, adventures and new experiences, goes back to the Hellenistic period. The ancient Greeks did not arbitrarily choose the figure seven – it was considered sacred and associated with specific or secretive events. They used the rating to select the most distinguished works of art, which combined artistic vision with the craftsmanship of an architect or sculptor.

Of course, the Greeks were not able to take into consideration monuments located beyond the world known to them. However, the foundation New7Wonders, established by Bernard Weber, a traveller and former assistant to legendary Italian director Federico Fellini, presents a new plebiscite, in which natural landmarks can be ranked in seven categories. The competition was tremendous, since the initial list of the candidates comprised over 400 proposed nominations from 224 countries. The atmosphere was heated, especially when two Polish candidates – the Masurian Lake District (in the category of landscapes and post-glacial formations) and Białowieża Forest (joint candidature from Poland and Belarus in the category of forests, national parks) reached the semi-final.

Thanks to Internet voters’ voices, the Masurian Lakes, which trumped the Kalahari Desert and Białowieża Forest, found themselves among such marvels as Mount Vesuvius, the Amazon rainforest, the Easter Islands, the Great Barrier Reef and Mount Kilimanjaro.

However, a panel of experts, under the leadership of Frederico Mayor, former chief of UNESCO, decided on the list of 28 finalists. Thanks to their voices the Masurian Lake District qualified for the list of places struggling for the prestigious title, whereas Białowieza Forest is on a waiting list, with a chance to be transferred to the list of finalists only if any of the 28 candidates are disqualified.

“Sincere congratulations,” said Bernard Weber in Zurich, underlining that during the next two years (until the Internet vote determines the winners) the eyes of the whole world will be on Masuria and Poland. The inhabitants of the region are delighted by the news.

Marek Kamiński, a famous Polish traveller, commented on the success in an interview with PAP: “Masuria is above all two thousand lakes and incredible landscapes [that are] unparalleled in the world. It also has an uncommon variety of birds, which comprises 300 species. The natural diversity is a great asset of this place.” He also added that it is a region unspoilt by civilisation and human activity, expressing his regret that Poles treat it in such a utilitarian way.

Local authorities have decided to go to great lengths to promote the region, and their plans also involve the establishment of the Masuria National Park, which would protect this unique area of nature. Rafał Kierwisz, an employee at the Voivodeship office, stated: “During these two years we want to convince members of the local government, who oppose the park [their consent is essential]. The Ministry of the Environment also offered help.”

Their success is undoubtedly due to the common enthusiasm of locals, who combined their efforts through a promotional campaign under the banner of “Masuria – wonder of nature” in which local authorities, self-governments, schools, media and private companies were involved.

We have to wait for two more years for the conclusion of the referendum. Whatever the final result will be, Masuria is already a winner and Białowieża should not be considered a failure. As Mr. Kamiński said, “It is remarkable that if we start roaming across Europe from the Atlantic Ocean, we will pass by Spain, France and Germany, and the first forest not planted by human hands is Białowieza.”