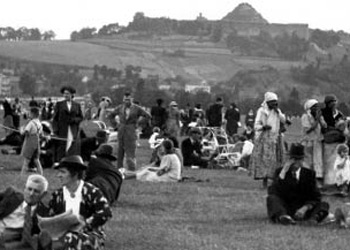 With the 70th anniversary of the outbreak of World War II next month, William Brand takes a look at Krakow during those pivotal times in a two-part article. This month, he focuses on the city in the last tense but still carefree days on the brink of war.

Those who do not spend August in the mountains or at the seashore try to stay cool in the city.

In early August 1939, respectable citizens on the south bank of the Vistula were outraged at the sight of men and women walking through the streets to the river in nothing but their bathing suits, and then walking back again after swimming.

You could go for a dip in the river, and you could go out at night. The avant-garde crowd gravitated to the Art Club on Łobzowska, and the place was going wild over the Lambeth Walk. That dance is an arrogant strut with a catchy tune that everyone knows, and at the refrain you throw one arm up in a cocky gesture of defiance, snap your fingers, and give a throaty shout. In Krakow in 1939, you ended with a thumbs-up sign that seemed to mean, “It’ll be alright — just wait and see.”

That was the message of another big attraction, the 25th anniversary of the first armed sally by Piłsudski’s Polish Legion, an iconic event in the foundation myth of the country that had regained independence less than two decades earlier. Krakow has always loved putting on a pageant, but with Hitler issuing his ultimatums, this one had special meaning.

The Polish press was building up Marshal Edward Rydz-Śmigły as Poland’s strong man, who could go toe to toe with any other leader on the block. Vast crowds turned out when he came to town on 6 August.

He attended open-air mass on the Błonia. What was Rydz thinking as he listened to the sermon? After dismembering Czechoslovakia in March, Hitler had Poland surrounded on three sides. Rydz was in check before he moved his first pawn.

When the sermon ended, he rose to address the crowd. His peroration was, “If anyone thinks we love our Fatherland any less than he loves his Fatherland, then he’s in for a surprise!” The cheers went on and on.

General Bernard “Bunio” Mond, beloved commander of the city’s 6th Infantry Division, would surely have preferred to be at the Lawyer’s Club on Plac Szczepański, where he often played bridge until the small hours. However, the Jewish boy from Stanisławów, who had made something of himself in the army, had to spend this August with his portly frame bent over the map table.

The plans called for Mond to move his division south of Oświęcim, into the Pszczyna Gap, where he would face the full onslaught of any conceivable German attack. Mond loved the Wisła football club as much as bridge, and he surely had no trouble calculating what the odds would be when, as they used to say, it all kicked off.

The public went through the ritual of making sacrifices for the national defence. At the beginning of August, the Krakow tobacco merchants pledged to raise enough money to buy the army a new heavy machine gun by 1 October. In mid-month, a business association donated a new set of musical instruments to the local artillery regiment.

Through the dog days, the tensions rose. For Henryk Vogler, a recent Jagiellonian University graduate who had danced the Lambeth Walk night after night, it was “like an accelerated throbbing in the human breast”. He had the same mixed feelings as many others: his country had a lot wrong with it, but it was cosy and it was his, “as dishevelled as the bedclothes after a good night’s sleep”.

Vogler reflected that his generation had known nothing but peace, and could only deal with the threat of war by shutting it out. He and his wife decided to get away. They rented a room at a guesthouse in Lanckorona and, to avoid the war hysteria, vowed not to make new friends, listen to gossip over dinner, or read the papers. They wandered through the woods for hours, gorging themselves on wild raspberries and currants until they lost track of what day it was.

Back in town, news of the German-Soviet pact of 22 August meant that the fix was in. The Archbishop cancelled the pilgrimage to Częstochowa. City Hall called everyone out to dig air raid shelters and soon announced that, with men, women, and children relieving each other at the spades all through the hot nights, there was already enough ditch space for a quarter of the population. The Planty, the Błonia, the squares, parks, and vacant lots were dug up. Children under seven had to have “small tags” with their name and address sewn on to their clothes.

Every building had to elect an air-raid commandant and stock up on sand, shovels, buckets, and a warning gong. Alcohol sales were banned under pain of a 500-złoty fine or four weeks’ imprisonment. Windows and headlights had to be blacked out, but cars and trams kept running and the movie theatres stayed open. City Hall froze food prices and there were no shortages.

One afternoon, the Voglers noticed the other boarders packing. Henryk broke down and bought a newspaper. It was 30 August. General mobilization had been declared. They went to catch the Zakopane-Krakow train. It was late and so crowded they could barely squeeze on.

The next morning, some people were carrying gas masks on the street.

At 35, Mieczysław Medwecki had spent 14 years working his way up to captain in the Polish Air Force and commander of the fighter squadron based at Rakowice airport, where the Aviation Museum now stands.

Late that afternoon, he led his squadron as they flew to their dispersal point, a stubbly field outside the nearby village of Balice. They could camouflage their fighters under the recently cut straw there.

Medwecki banked into the wind. He was 100 kilometres from the German border. The setting sun was in his eyes; everyone who saw it that day remembered its reddish hue. He could not have known that he was on final approach for his last landing.

To be continued next month.