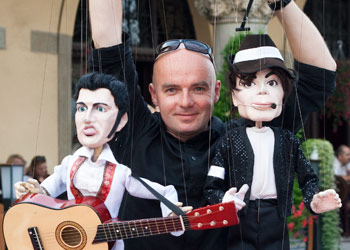 This month, City Life found Krzysztof Falkowski on the Market Square, where he performs his “Falko Show” daily. The puppeteer combines theatre, cabaret, and popular music in a unique show that features marionette versions of Elvis, Michael Jackson, Tina Turner and several other icons of pop music, singing and dancing just like their flesh and blood counterparts. Catch him daily on the east side of the square.

If you could live anywhere in Krakow where would it be?

I live in Kazimierz, but the best place to live for me is Wola Duchacka, where there is peace and quiet.

If as king I were all-powerful, then I would command that a subway be built in Krakow. Wouldn’t it be beautiful to be able to go from Central Square in Nowa Huta to Matejki Square in the centre in 13 minutes? Oh, it would be great!

What’s one place tourists mustn’t miss when in Krakow?

The view from the mound of Prince Krak.

There are many things that are not advertised enough.

The monument would be a table with chairs as a symbol connecting people. A round table in one of the squares would remind foreign tourists that it was in Poland that the changes began which would lead to us living in a free Europe.

Which Polish stereotype do you find the funniest?

In the shopping centres. I quickly enter, buy what I need, and walk out even more quickly – or rather run.

Chimera, the salad bar, and Bar Smak at Karmelicka Street 9.

Traffic jams on the streets of Krakow.

I work on the weekends.